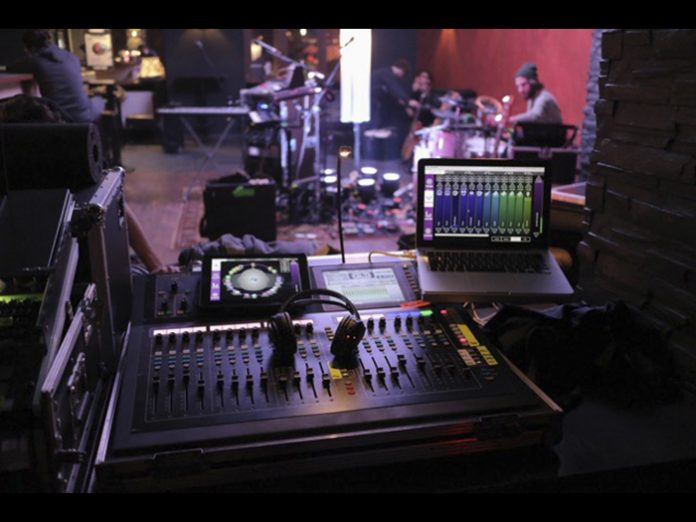 Silent concerts are an interesting alternative at open air concerts in residential areas, allowing bands and DJs to play throughout the night without a loud, intrusive PA.
One of the biggest silent concerts ever staged in Germany took place at Marienplatzfest in Stuttgart recently, where an enthusiastic crowd donned more than 1000 headphones to listen and dance to the sound of German band Adulescens.
Responsible for the 3D listening experience was Tour Manager and FOH Engineer Tobias Raunigk, who adapted the concept of silent concerts for the band utilising and Allen & Heath GLD-80.
“With the 3D listening experience we want to deliver something special for the audience and the organiser alike,” explained Raunigk. “Sometimes the audience is a bit hesitant at first but when they put on the headphones you can see them dive into the ocean of sound.”
“I’ve been using the GLD-80 for five years now. At the time I was looking for a compact but flexible console which I could set up fast and easily myself at festivals. Our fastest change over just took four minutes,” Raunigk laughed. “Working with a GLD-80 was extremely smooth from the beginning since I was used to mixing on analogue desks from Allen & Heath. To me, the GLD-80 is simply one of the most intuitive and musical digital desks out there.”
The FOH Engineer continued: “I’m using the full range of effects processors in the GLD-80 and got rid of all the outboard sideracks. I think the choice of EQs and compressors is excellent and I love fattening kicks and bass with the Hypabass subharmonic synthesizer.  I’m a big fan of the ping-pong delays, especially with Adulescens, for giving the vocals that spacey sound the band wants.”
“The 3D headphone mix for the audience is generated by a KLANG:fabrik from KLANG:technologies, which is connected via Dante to the GLD-80,” Raunigk continued. “The integration of the GLD-80 into the Dante network is fast and easy and the elegant layer structure allows me to combine audio input layers with MIDI layers to control the musicians’ inputs and 3D headphone mix at the same time.”
http://www.allen-heath.com/