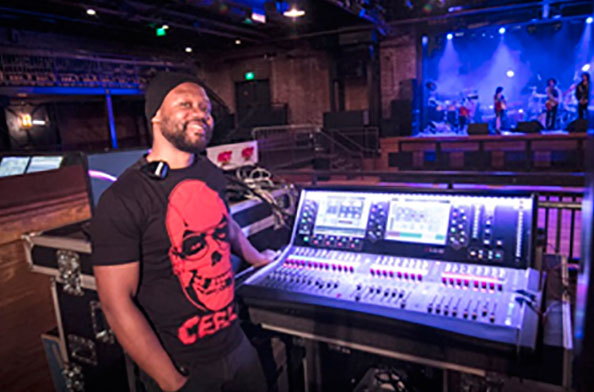 Grammy-Award Winning Hip-Hop and R&B artist CeeLo Green recently completed an 11-city “Love Train” tour celebrating the release of his new album Heart Blanche. Although past performances featured a full acoustic band, CeeLo wanted to “pull it back” for this tour and, for these audiences he performed with just a sax and flute player, a percussionist and a DJ. However, the simplicity of CeeLo’s stage masked a complex production with music ranging from hip-hop to jazz and a sophisticated audio system using an Allen & Heath dLive S5000 mixer and DM48 MixRack.

Art Merriweather, CeeLo’s front-of-house and monitor engineer, used wireless mics for CeeLo and all three backup vocalists and connected the sax player’s pedal board, the percussionist’s feeds and the DJ via direct inputs to the DM48 MixRack on stage. Merriweather mixed and grouped these sources into as many as eleven different feeds for the house sound system and on-stage monitors. He noted that CeeLo’s stage level can be high. “This is hip-hop,” he said, “They want it loud so they can feel it. Nobody on the tour likes in-ear monitors, so we’ve got powered wedges on the stage.” To minimise bleed caused by the high stage level Merriweather uses the dLive’s input-channel gates on the vocal mics and the sax player’s instrument mic.

Merriweather praises the dLive’s several vintage reverb emulators calling them “spot-on the best I’ve heard.” He uses two different dLive reverbs on the DJ, echo plus reverb on the sax and a pitch shifter on CeeLo’s hit song, “Crazy” to double the artist’s voice both two octaves up and two octaves down.

As he has “more mixes than sources”, Merriweather sets up the dLive with his outputs on the left-most faders and inputs on the centre faders. He uses a second layer to manage effects and another for EQ settings. He does a multi-track recording of every performance via the dLive’s Dante card to a Mac Mini and plays it back during setups using a dLive scene to implement the mixer’s “virtual sound check” capability. Merriweather says CeeLo’s show hits the dLive hard but it has ample dynamic range and its 96k sample rate makes it better sounding than other digital mixers he’s used in the past. He has the desk highly customised with colours and labels and loves the ease of drag-n-drop setup.

Merriweather, who has 12 years’ experience as a front-of-house and recording engineer, said this was his first experience with the dLive on tour but he wants to use it on other runs with different artists. “I love this desk,” he said, “and, whatever it can do, I’m doing it!”