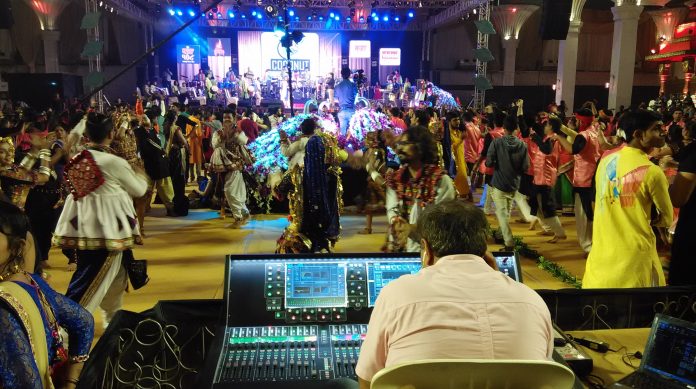 Indian PA company, Stagecraft, recently employed its new dLive digital mixing system at the huge 10-day Dildar Dandiya dance festival, held in the city of Gujarat in Surat, known as ‘Land of the Festivals’.
The organisers appointed pro rental company, Stagecraft, to manage the challenging brief. Stagecraft had recently purchased a second dLive system from Allen & Heath’s distributor, Sun Infonet, comprising the flagship S7000 Surface with DM64 MixRack, to join its existing S3000 / DM48 system. The S7000 / DM64 system was selected as the FOH and monitor mixer for the festival, managing a spectrum of instruments such as eight dhols, six drums, five floor drums, one kick drum, Indian acoustic percussions, bass, guitar, banjo, saxophone, clarinet, melodica, and keyboards, totalling 64 inputs and 27 outputs.
The MixRack was positioned on stage, connected to the Surface at FOH and a laptop running the dLive Director app, which was used as a monitor mixer.
“dLive worked flawlessly for 10 consecutive days. The flexibility of the dLive surface and complete open architecture allowed me to customise my own surface. The built in features, such as dynamic EQs, multi-band compressor and sub harmonic synth, made the job easier, and I could feel and hear each and every instrument. dLive has become my default console for any event,” said Pintu, System Engineer & Director of Stagecraft.
www.allen-heath.com