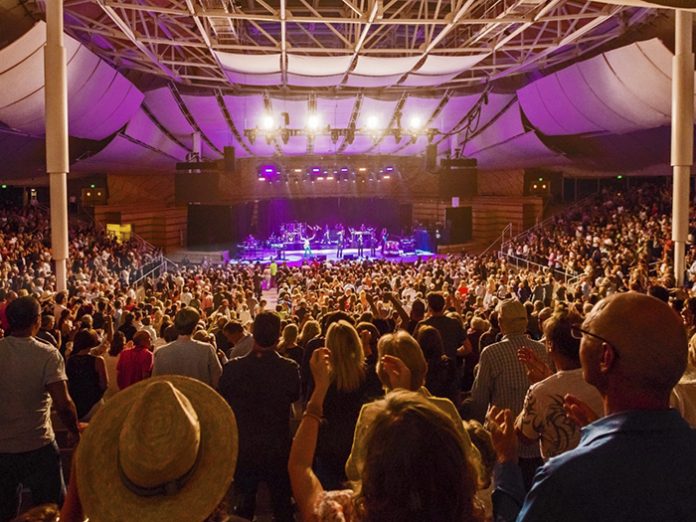 Every year in June the Jazz Aspen Snowmass (JAS) June Experience features four nights of headline concerts at the spectacular Benedict Music Tent in Aspen, Colorado. The 2050-capacity venue has always been a difficult space for amplified music, but this year an Alcons Audio system finally tamed the tent.

Situated on the campus of the Aspen Music Festival and School, the Benedict Music Tent is an open-sided structure with a curving roof made of Teflon-coated fibreglass. The combination of its design and an ageing PA designed only for vocal reinforcement meant the sound quality at amplified shows has always been unsatisfactory.

Alchemy Concert Systems is the venue’s regular production company and, for this year’s June Experience, both JAS and Alchemy wanted to deliver amplified sound quality that would surpass all previous years.

“It’s a unique venue, a symphonic amphitheater which was never designed to host amplified rock’n’roll type shows,” said Alchemy co-owner John Czechowicz. “The house PA was installed back in 2006 and it has always been inadequate to properly cover the venue. For the past five or six years it has been augmented for amplified shows, but we’ve always been kind of piecemealing a system together. This year we wanted something much better.”

Czechowicz contacted Rainbow Production Services of New Hampshire, who suggested using an Alcons LR18 system. Flown directly in from its use at the InfoComm trade show in Orlando, the main challenges were delivering even, high quality coverage throughout the main seating area and much-improved vocal intelligibility.

This was Czechowicz’s first experience of an Alcons system, but it impressed him from the start. “The immediate advantage was that the boxes were smaller and provided more elements in each, which really helped with coverage,” he said. “Previously we had only been able to have frontfills which were one unit high, because of their size. This really limited their effectiveness. Stacking the smaller LR7s two high meant they were able to penetrate much further into the ground tier of the audience area.

“Using the RR12s as outfills really helped with covering the slope of the amphitheater bowl, while the BC543s outperformed any sub we’ve had in the venue, the custom carbon fibre 5.3-inch voice coil woofers making a real difference. It was also the first time we’d used cardioid subwoofer arrays in there, which definitely helped, including reducing the amount of low frequency energy onstage.”

Another aspect of the Alcons system that impressed Czechowicz was the flexibility of a BC332 cardioid subwoofer and QR24 modular line-source array column on each side of the stage.

“The QR24 is a really interesting product,” he said. “For some bands we used them as monitor sidefills, for others we turned them through 90 degrees and used them as audience infills. The vertical coverage is amazing – you can bend your knees and literally dip in and out of the sound field.”

David Rahn from Alcons US flew in for a day to help rig and tune the system, demonstrating another advantage – that it really is an ‘out of the box’ solution.

“David was really under the gun time-wise, but we got the system up and tuned very quickly,” said Czechowicz. “We only needed the software in the Alcons Sentinel amplified loudspeaker controllers – Rainbow had provided a third party loudspeaker processing package but we didn’t use it. Very little EQ and no amplitude shading at all was needed to tune the system. With the old vocal reinforcement system significant amplitude shading was needed to even out the coverage, so this was another big advantage.”

Although the Alcons system impressed Czechowicz, what would the artists, their engineers and the client think?

“I was slightly concerned about rider-friendliness,” he admitted “None of the acts had heard of Alcons and touring engineers tend to like what they like, be wary of what they don’t know and quick to criticise what they don’t like. But there were no issues at all and everyone was very positive about the Alcons rig.

“We had let JAS know that we were bringing the Alcons system in and Chad Fuller from Rainbow was very enthusiastic, taking the time to explain its many benefits. They were really happy and stated that the sound at the June Experience was a big improvement over previous events.”
www.alconsaudio.com