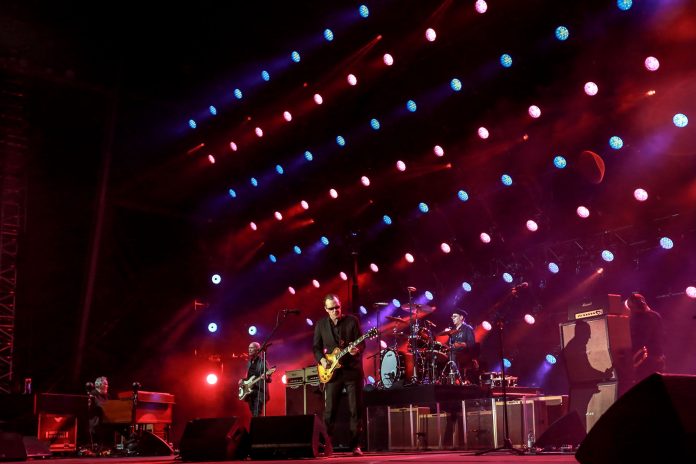 Adlib delivered lighting, sound, rigging and crew for the recent UK and European tour by blues rock guitarist Joe Bonamassa and his band, which culminated with a headline show – recorded for DVD – at the Greenwich Music Time festival staged in the grounds of London’s historic Old Royal Naval College.

Lighting Manager Dave Eldridge of Adlib coordinated the lighting requirements for Bonamassa’s regular LD Justin Duguid for the UK section of the tour, while Adlib Director Dave Jones looked after all things audio for both the UK, where a full sound rig was supplied, and Europe, where the tour continued with a control package.

Eric Roa was the tour’s Production Manager, with Charlie Rushton acting as Adlib’s main Lighting Technician out on the road. Mark Johnson was the main Adlib PA Technician.

The front truss was rigged with 10 Vari-Lite VL3500 Washes and nine 4-lite Moles pointing into the audience, and the upstage three were all identical and loaded with eight Clay Paky Mythos units and 14 outrigged scaff bars, each clamped with three Martin by Harman MAC Aura LED washes – making 126 Auras in total.

At the ends of the trusses – both upstage and downstage – were custom frames each rigged with six VL500’s for side lighting. These frames were independently flown on four quarter-tonne motors. The lights had a triangular configuration with three at the bottom rail, two in the middle and one at the top.

There were another eight 4-lite (square) Moles on the deck along the back of stage that shone through and silhouetted the band dramatically in the smoke. MDG Fog’s theONE hazer was provided for atmosphere and Duguid programed and operated the show on an MA Lighting grandMA2 full size console with onPC as a backup.

The team enjoyed the relative luxury of eight days of pre-production rehearsals in the new Fly by Nite studios in Redditch, with the lighting rig assembled at one end of the space and the band and audio system the other.

After four days, the band and audio moved underneath the lighting rig and they continued to rehearse as a full production. Rushton was joined by Adlib crewmembers Jeff Bond and Jordan Willis. “It was a brilliant tour in all respects, great atmosphere between everyone, all the shows were sold out and the music was excellent,” he said.

The PA system for the UK gigs comprised arrays of eight L-Acoustics K2’s underneath four K1’s a side, a design developed by John and fine-tuned exactly to Bonamassa’s demanding requirements.

Side hangs of K2’s were added if necessary for venues like Preston Town Hall, which is very wide, and the out-hangs were essential.

They carried L-Acoustics ARCS speakers for in and out fill as needed and KARA for lip fills.

Adlib supplied a DiGiCo SD10 for FOH, whilst a Midas H3000 was used for monitors, as well as a few pairs of d&b audiotechnik M2 wedges.

Adlib supplied a standard mics package and the band also brought their own. Challenges for audio also included the Cavern Club showcase where they had less than a quarter of the standard stage space they usually take up. Only the control package went in to this show.

Director and Account Handler for Adlib Dave Jones said: “We’ve been lucky enough to work with Eric Roa and his brilliant team for many years now, it is honestly a pleasure. The live shows have grown over the years and Joe Bonamassa has proven to be one of the best guitarists & performers out there on the live scene.”