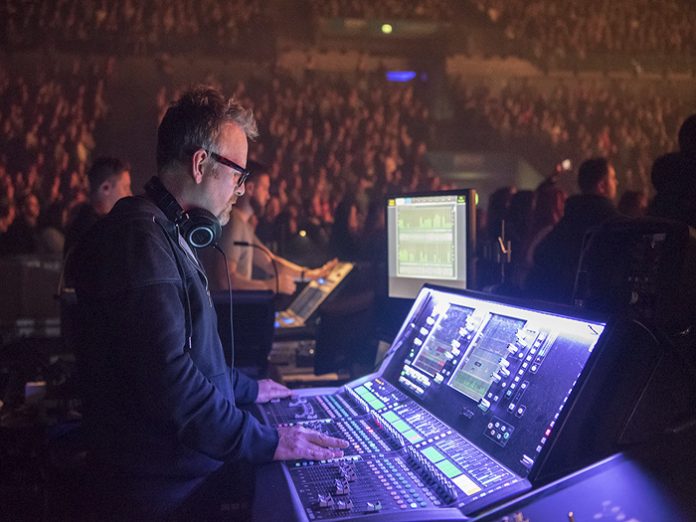 He and monitor guru Marc Peers are also both well-known and talented Adlib regulars who have worked on previous Script tours and both assumed engineering roles for the first time. Long term FOH engineer Richy Nicholson flipped roles on this one, after many years of mixing FOH, he represented Adlib as the account handler, co-ordinating everything from the office and warehouse perspectives.

A top touring crew joined Pato and Marc on the road including systems engineer Alan Harrison, George Puttock, Jay Petch and Laurie Binns. It’s the first time The Script have used CODA in arenas, a decision made by Pato after using it on last summer’s album launch tour.

Pato loves the outstanding clarity and precision of the CODA sound, together with its huge flexibility, meaning that it can be quickly & easily adapted and rigged in different sized venues. He relished the daily challenges that come with using CODA due to its studio monitor quality output, which means “you really have to up your game” to take advantage of its enormous dynamics and transparency.

The main system set-up saw main left and right hangs of 14 AiRAY dual 12inch speakers, complete with 4 ViRAY dual 8inch downs, side hangs of 12 AiRAY with 4 ViRAY downs, plus an upstage hang of 8 ViRAY and a centre cluster comprising another 8. The flown subs were 8 SC2 dual 15inch bass cabinets, run in conjunction with a ground stacked spaced array of 32 SCP dual 18 subs. APS 10s and HOPS 8s were used for front fills.

Being a rock band with plenty of power pop influence, the music required excellent low / mid power, perfect delivery and intelligibly, and this plus the PA’s ability to reveal intense detail without any elements sounding harsh or strained was another reason for the choice.

”You can get all the low end needed without creating any artefacts,” Pato stated, “and the frequency response stops exactly where it’s supposed to stop, which is just fantastic!”

With 11 trucks and a rolling stage, time was at a premium and the slot times tight, however with the practical handling and straightforward rigging system, the AiRAY simply flew up each day, and they have been in & flown within 2 hours of tipping, allowing the other departments – lighting, video and staging – more time to concentrate on their work. CODA’s modelling software EASE Focus 3 and its sonic signature also makes it seriously faster than other systems. Alan and Pato both agreed that “it sounds incredible straight from the off.”

The PA drive system was digital from mic converters to the amps, so benefits from minimal signal degradation from multiple A to D conversions. He fed his Lake LM44 at FOH via AES from the Allen & Heath S7000 console, and then Dante down to the Lake LM26 processors positioned stage left and right. AES over CAT6 from these was sent to the amplifiers which were the new 4-channel Linus 14 with 5K of RMS per channel.

Pato chose the S7000 for its simplicity, power and ease of use. “It has everything you need – no plug-ins or other stuff needed, it has loads of inputs and is totally user-friendly!”

Pato explained that because the CODA reveals so much, intricate effects pop out on some of the tracks that have previously not been audible. One of his tasks was ensuring these are all present and balanced in the mix, for which he finds the console’s dyn8 insertions really helpful. “It’s an incredibly clean system for such a small box,” he concluded.

Adlib’s Marc Peers specified a Midas PRO X console, chosen for its excellent sound and – similar to Pato at FOH – because no outboard is necessary and everything you need is right there at your fingertips.

The band tour their own Sennheiser IEM system and the only monitor speaker onstage is an Adlib MP4 drum sub for some atmosphere in that area. They ran 8 channels of Sennheiser 2000 series, 5 for the band, a spare, a tech mix and an EQ channel, so it’s a straightforward setup.

Richy Nicholson concluded: “It has been great being part of the Script Family for so many years and to have the opportunity to carry on in this new capacity. They are a brilliant live band and the production always gets better with each tour. Pato and Marc along with our crew are doing a great job out there, long may it continue!”