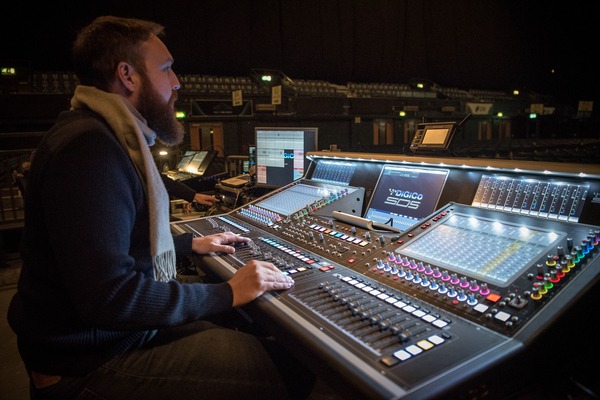 Charlie Rushton and John Haggart of Adlib ensured that this all ran smoothly, starting with the large 40ft wide x 22.5 deep projection screen as specified by the production. Adlib has a number of Stumpfl screens and this one – a 40 ft. wide Vario 64 – was chosen for its quality and precision as well as the modular construction which ensures a nice rigid surface. While PA technicians Otto Kroyman and Jethro Hall looked after the system, with Terry Smith and Chris Snow co-ordinating everything at the stage end; working alongside the production’s FOH engineer Sylvain Denis and CineMuse’s Marko Ambachtsheer.

An L-Acoustics K1 System was specified, with a careful combination of L-Acoustics K1, K2 and KARA loudspeakers. The main hangs were 12 L-Acoustics K1 a side, with 4 KARA-downs and the side hangs were 8 K2 a side, with KARA also used for infills and outfills. The low end of the spectrum was covered by the new L-Acoustics KS28 subs, 6 a side, which were ground, stacked in front of the stage. L-Acoustics LA12X and LA8 amps drove the entire system and Adlib’s Lake LM44 control racks were specified for zone control, EQ and signal distribution.

Monitors were controlled from FOH. The strategic location of upstage wedges and “fill speakers” helped the orchestra achieve a consistent stage sound and Ben Pope the conductor, a vital link in the whole show delivery, had a shout system to help with cues and other instructions. A mix of DPA 4011 and 4099 mics covered the large string sections, with Neumann, Sennheiser and Shure covering the rest of the orchestra, as per Sylvain’s specific requests.

Dave Eldridge and Adlib’s lighting specialist Tom Webber created a design based on the requirements from DreamWorks and Barry Jepson. They were asked to specify a package to illuminate the orchestra and provide subtle but effective keylight whilst ensuring that the projection screen remained the centre of attention. Webber worked on site with Jon Barlow who tech’d both lighting and video and dedicated lighting tech, Ash Dawson.

Quad trusses were utilised, the most upstage made up from Prolyte H40V for flying the screen and some drapes immediately behind. The back lighting truss was Prolyte S36 pre-rig, with 10 Martin by Harman MAC Viper washes positioned on it for covering the orchestra, plus 2 MAC Viper Profiles providing the all-important elegant return light on the conductor. The front truss was also made of S36 pre-rig, containing 8 MAC Viper washes giving a general stage wash, plus 4 Viper Profiles for additional conductor key light. Vipers were chosen as a versatile source offering all the features needed for appropriately lighting the performance. An MA Lighting grandMA2 light – Tom’s console of choice – was used for lighting control.

Client Manager Phil Kielty concluded: “To be part of something iconic and memorable in Wembley Arena was a privilege. All of our team worked extra hard alongside Barry, MJR & CineConcerts to ensure that the audience could just fall into watching the movie moments whilst enjoying the incredible orchestration. We really enjoy the richness and experience of delivering these orchestral projects and look forward to working on many more in the future.”