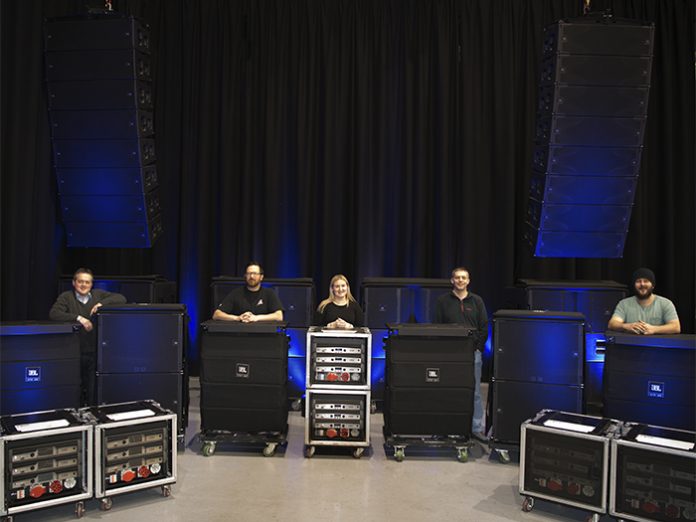 Jones said the re-investment in JBL had been “merely a matter of time; we have always wanted to offer our clients a choice of systems and it is great to have JBL back as an option.” But it had been the substantial upgrade in technology, packaging and vastly improved software and rigging, that became the deal maker.

Tracing the journey, he said, “We have a long history of working with Harman products such as Soundcraft, BSS and Martin Lighting, and we have been having this particular conversation for years.”

Having been impressed with the VTX V-Series at a demo in Belgium when it was launched in 2012, Sound Technology, along with HARMAN’s EMEA Application Team Manager, Ed Jackson, had always kept in touch with Adlib as the technology had developed. Subsequently, a demo of the new VTX A-Series A8 and A12 system was conducted at Adlib’s premises in Liverpool last year.

“We had used the VTX V-Series system a number of times over the years, so were familiar with the platform,” Jones confirmed. “But the platform has now moved forward considerably in terms of the mechanical aspect, while the entire rigging system is far advanced from where it was previously, and the software has come on in leaps and bounds. On top of that it is a compact and light weight system and there is very little you need to do with it out of the box.”

However, there were other compelling reasons for the purchase, he said. “We were starting to hear ever more positive things about the A-Series. Asking around at NAMM this year, the number of people talking about it really helped to cement the deal,” he confirmed.

“We believe the A-Series will attract a different client base and will entice more international acts. In fact we are already in discussion with a number of tours and looking forward to deploying the system on festival stages over the summer.”

Finally, Dave Jones emphasised that the purchasing decision had been influenced by the positive feedback from last year’s demo and the support of their pool of sound engineers. “We have scheduled training dates in the next month to ensure that our engineers are confident to support the product in the field.”

At the same time he paid credit to Sound Technology’s Joe East for his influence in the sale.
Commenting on the acquisition, East said, “Adlib’s decision to buy into the JBL VTX A-Series platform represents a significant milestone for the UK rental market and is further demonstration of the system’s rapidly increasing popularity across the globe. We’re over the moon to welcome our good friends at Adlib back into the JBL family.”

And the final word came from Ed Jackson: “Adlib have always prided themselves on their very high standards, and their decision to invest in JBL VTX A-Series as a tool to carry on that excellent work is an indication of the quality of the system,” he remarked. “We’re very proud to be associated with such a skilled team and look forward to working with them.”