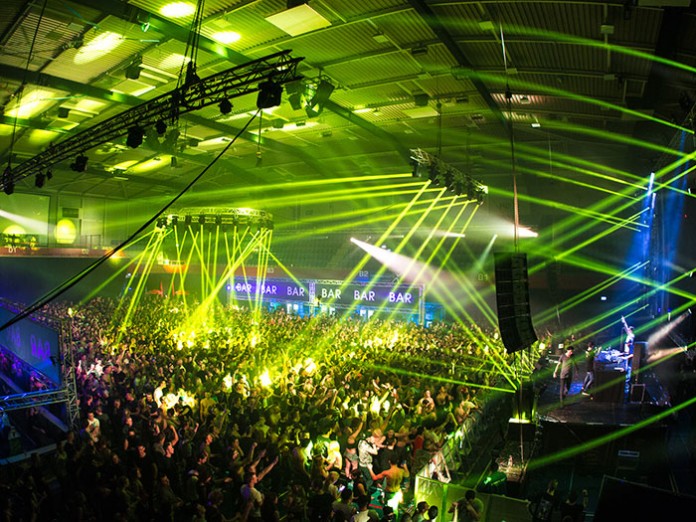 Every good festival needs an energised atmosphere. And key to creating this atmosphere – aside from the music itself – is the lightshow that accompanies it. So, when Trend Productions took on the task of lighting the Shockerz hard house festival over in the Netherlands, they knew they could rely on a selection of ADJ’s most powerful, adaptable effects and fixtures to get the job done. Showcasing the very best hardstyle DJs, this year’s Shockerz was held at the Maaspoort venue in Hertogenbosch, Netherlands and drew in around 3,000 visitors.

Such a big event obviously needed the lightshow to match, so when the lighting designers explained that they had no preference when it came to brands, Trend Productions went with the products that they deemed most reliable, choosing a series of ADJ fixtures.

“Trend Productions went with ADJ products because they’re very reliable – often just as good as the top brands – and they felt that the price-to-quality was good,” explained ADJ Europe’s Pierre. “The lights performed very well! They didn’t have a single error during the whole show, not even a minor colour error or anything like that.”

Shockerz took place inside one of the Maaspoort centre’s huge halls, with thousands of music fans filling the space in front of the stage, an electric atmosphere building as they drank at the bars which line the room. The hardstyle event boasted an incredible line-up, featuring leading artists of the genre such as Crossfight, The Pitcher, Voidax and Deluzion. In total, the event required 42 Vizi Beam Hybrid 2Rs, 60 Inno Color Beam LEDs and 10 Crazy 8s, providing a varied and flexible lightshow that lighting designer Ad van Veghel used to complement the music.

Incorporating 60 Inno Color Beam LEDs into his lightshow, Ad was not just able to scan the audience with sharply defined beams in a series of vibrant hues, but also wash the stage and immerse the entire venue in the same colour. Thanks to the high-output 108W CREE LED source and concise 13.5-degree beam angle of the Inno Color Beam LED, eye-catching colour beam effects were sent down into the crowd, with the fixtures mounted to the on-stage trussing. Utilising the fixtures’ flexible 630-degree pan and 220-degree tilt movement, Ad was also able to send the beams shooting through the air above the crowd.

Working with the Inno Color Beam LEDs to deliver a series of atmosphere-enhancing beam effects, the Vizi Beam Hybrid 2Rs were positioned flat across the front of the stage, allowing them to shoot upwards into the air to create some seriously cool effects, emphasised by the use of fog and haze. Again, Trend Productions chose the Vizi Beam Hybrid 2Rs for their reliability, but also for the added features that make them such versatile fixtures, including the spellbinding multi-beam effects created by the 8-facet prism.

“The engineer chose the Vizi Beam Hybrid 2Rs for their quality and also their reliability,” confirmed Pierre. “Trend Productions used them in the front but also to shoot beams out from the back of the stage, behind the DJs. They also made good use of the prism effects and the frost filter.”

Thanks to its unbelievably powerful Philips Platinum 2R discharge lamp, tight beam angle and huge levels of colour variation, the Vizi Beam Hybrid 2R was the perfect choice for filling the venue with well-defined beams in a range of colours, working alongside the other ADJ products to produce a striking and memorable lightshow for guests.

While the beams and wash effects generated by the highly adaptable Inno Color Beam LEDs and Vizi Beam Hybrid 2Rs were undoubtedly a key aspect of the lightshow, Trend Productions also wanted an energetic party effect to enhance the visual experience that Shockerz provides. Mounted high above the crowds on the circle trussing in the centre of the hall, the Crazy 8s allowed a frenetic, energised display of sharp, quick-moving beams to be generated, thanks to their 8W white LEDs, tight 4.5° beam angle and fluid movement. While the pre-programmed lightshows proved incredibly useful throughout the event, Ad also went in-depth with his control, utilising the fixture’s dual-bar design and eight individually controllable LEDs to create an inventive display that imitated an aircraft – something that the crowd loved as they danced beneath it.

Although the team at Trend Productions only opted for a range of three ADJ effects, their versatility and high output meant that a far more expansive display of pure lighting excitement could be created throughout the venue. Providing slicing beams of light that worked incredibly well for mid-air effects and crowd scanning, lighting designer Ad also found that the extra features – such as the Vizi Beam Hybrid 2R’s frost filter – meant that he could also wash the crowd in vibrant greens and reds, and keep the atmosphere energetic with intense strobe effects.

Out of all the ADJ effects used it was perhaps the Vizi Beam Hybrid 2R that became the star of the show, having a positive effect on the audience and being well-received by the production team: “Without any doubt it was the Vizi Beam Hybrid 2R which had the biggest impact,” said Pierre. “Not only did Trend Productions find the price to be very good, but they also found them very dependable. Simply put, they produce beautiful beams – and the beams were a big part of the lightshow at Shockerz!”