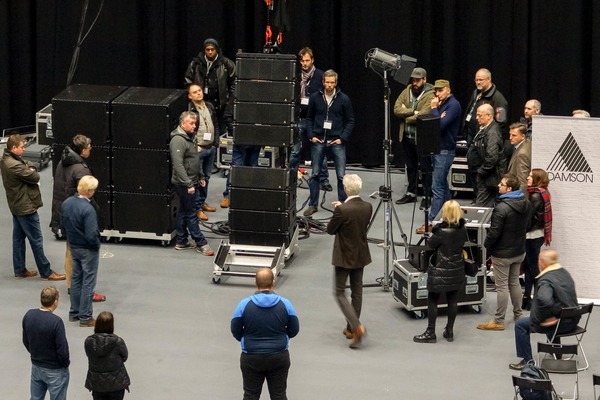 The Warehouse Sound Services are set to host a presentation and demonstration day of Adamson Systems Engineering loudspeakers on Tuesday 3 October 2017 at the Backstage Centre in Essex.

The Warehouse Sound Services, UK distributor for Adamson, has invested heavily in Adamson equipment since 2016. The company will showcase the Adamson S-Series and new Adamson IS-Series of premium loudspeakers, with key personnel from Adamson and The Warehouse on-hand for the demonstration.

Adamson’s acclaimed S-Series of tour-grade loudspeakers, including the flagship S10, will be demonstrated. The 2-way, true line source sub-compact line array cabinet has been deployed in the UK for shows by the likes of Bryan Adams and Shawn Mendes, plus major events like the Edinburgh Festival production of Trainspotting, Rock the Stadium in Falkirk with Madness and Jess Glynne, and the Montrose Music Festival, headlined by The Beach Boys and Deacon Blue.

During the summer of 2017, The Warehouse deployed over 100 Adamson loudspeakers, including the Adamson S10 at the Virgin Money Fireworks Concert, which closed out the Edinburgh International Festival with a performance by the Scottish Chamber Orchestra.

Adamson and The Warehouse are also hosting the first UK demo of the install-focused Adamson IS-Series in the UK, which packs the company’s sophisticated tour-grade technology into sleek architecturally friendly boxes with rugged and unobtrusive rigging solutions. The IS7 2-way, full range line array loudspeakers and complementing IS118 subwoofers will be on demonstration.

Justin Frost, Adamson Brand Manager for The Warehouse, said: “Adamson is a world leader in the loudspeaker market. The company develops and manufactures a complete line of superior, advanced technology loudspeakers for the touring and installation markets. The feedback we have had from recent trade events has been phenomenal and we are hosting the demo event to meet the demand from the UK market to see and hear what Adamson has to offer.

“The S10 line array pairs Adamson’s Controlled Summation Technology with a newly designed 10-inch Kevlar transducer to provide a performance level unheard of in this format. Many system designers and sound engineers are very impressed with the S10’s blend of performance, footprint and pricing. The IS-Series is perfectly suited for wide ranges of applications, including performing arts centres, live performance venues, sports venues, conference centres, and houses of worship and we have already had strong interest in these products,” Frost concluded.