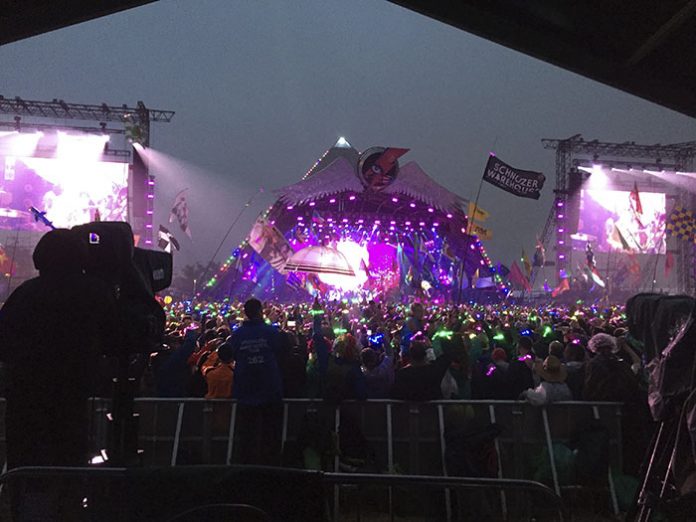 Despite feeling like forever, the very first Xylobands were used on 6 October 2011 for Coldplay’s launch show for Mylo Xyloto in Madrid with Deanie Thain and Jason Regler as brains behind the hardware. Thain recalled how it all unfolded, “We have just celebrated our five-year anniversary. The first wristbands had a timer, so each one had to be programmed individually to go off at exactly the same time – quite a challenge and very time-consuming and a lot of friends and family helped to get them done on time.”

‘The original idea came from Jason Regler seeing Coldplay perform Fix You at Glastonbury 2005,” continued Thain, “He wanted something to unify the crowd with lights and make them part of the show. After the first trial event, we then had another short time to create a radio-controlled version of the wristband for the Mylo tour.  We worked with some great designers and engineers and after a few trips to China to meet suppliers, we were in production. Once the tour started, word quickly spread about Xylobands – the reaction from the press was fantastic, and this obviously helped us market our product to the corporate, sport and entertainment industry.”

Specialz entered ethe story upon recommendation by Coldplay’s LD, Paul Normandale. He elaborated: “We wanted to light the iconic Pyramid stage as part of Coldplay’s show at Glastonbury using our LED balls (the balls are radio controlled in the same way as Xylobands.) The challenge was to create a festoon that could fully support over 500 LED balls without being attached to the structure.  Each LED ball was programmed, tested and charged, before being secured into its holder and then rigged onto the outer staging. After days spent trying to find a workable solution, we quickly realised that we needed some experts to take on the task.”

“We wanted the carriers to be deployable overnight onto the iconic Pyramid Stage without damaging the skin of the stage or appearing too obvious throughout the day,” Normandale explained, “So we needed an outfit who understood both the design objective and the challenges of the environment. Who else could that be but Specialz? I worked with them defining what was required along with Deanie and Jason, agreeing the format, the number of balls etc, and then left it to Dave Smith and his team to come up with the reality – which they did – as always!”

“Dave was our main contact,” continued Thain, “The festoons were designed, tested and delivered in around six weeks so there were numerous emails and calls in the first stages and everything was explained clearly and gave us confidence in the team. We sent them balls for testing so we were very confident there would be no issues on site. The project went very smoothly and was delivered on time – the only thing we couldn’t do was light one of the trees but that was down to the traditional Glastonbury rain which prevented us from rigging the tree before the crowds arrived – even Specialz can’t control the vagaries of an English summer.”

“The concept had been to interact the Pyramid shape with the wristbands deployed in the crowd,” explained Normandale, “Thus enhancing the stage and crowd interaction which always has been the primary task of the Xylobands but on this occasion, with the festoon carriers in place with the hundreds of LED balls on the roof, we also provided the TV production with great aerial geographic definition of this unique performance. I have no doubt that they will enter the Coldplay box of tricks for magical moments yet to come.”

“Without Specialz we may not have been able to take this next step with the Xyloband story,” concluded Thain. “Since 2011 we have developed the bands from a single colour wristband to RGB – colour change. We can activate the wristbands in groups or zones, which allows us to create blocks or waves of colours, or teams of colours at corporate events. We can also activate individual wristbands, so we can identify competition winners out of a crowd of hundreds, or even thousands. We always try to come up with a solution that will work for our clients and with Specialz’s ingenuity the Glastonbury festoons worked perfectly. We met with Dave from Specialz after Glastonbury and are hoping to work together again in 2017.”