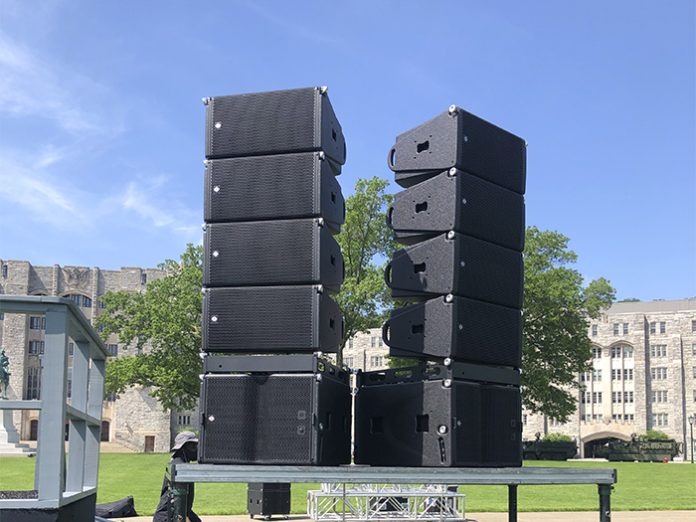 It’s becoming a regular occurrence. When Eastern Stage Productions (ESP), one of the most respected production companies in North America, supplies CODA Audio sound systems for events, it is often a USA crew’s first contact with the German manufacturer’s state-of-the-art, next generation systems, and according to ESP founder Bill Danilczyk, their response is invariably a big thumbs up:

“They are alway more than happy. Few adjustments are ever needed, headroom is never an issue, the clarity of sound is exceptional, and shows go down a storm. It doesn’t get better than that.”

ESP’s relationship with CODA Audio can be traced back to 2019 when Danilczyk first heard CODA at InfoComm, and was immediately sold on the sound: “The high fidelity of the sound is amazing with the real game-changer being the DDP driver. You get the same amazing fidelity from the CODA system as you would from the highest quality hi-fi systems – getting that at much higher output levels blew my mind right away.

You listen to music you’ve heard one thousand times and all of a sudden you hear new things. These kind of intricacies and this level of sonic detail is something that was totally missed before and it translates to the live stage. And the low end? Well, the immense benefits of the sensor-controlled subwoofers revolutionize low frequency reinforcement – the impact of the bass is phenomenal.”

Perhaps the key to CODA Audio’s impact can be found in the performance of its flagship AiRAY system, which brings scalability and freedom to large scale audio design by combining the high SPL of traditional systems with the flexibility of an ultra-compact, exceptionally high quality line array. According to Danilczyk, some business partners take some convincing that the bold claims about CODA Audio are true, assuming that units of such small size and weight could not possibly deliver:

“Some are skeptical to begin with, but so many times their surprise after the first soundcheck is enormous. They can’t believe their ears and are stunned at the power and audio performance that such small enclosures can produce. Every time this happens, CODA Audio becomes an instant first choice.”

Ever since graduating as an audio engineer from Berklee College of Music in 1979, Danilczyk has been committed to using the highest quality, state-of-the-art equipment available. As far as this vastly experienced professional is concerned, CODA’s innovations are unmatched in the market: “Phase correct from 50 to 20,000 Hz and less than half the weight of comparable products with less distortion and more power – for me, CODA is the leading provider of next generation, phase-accurate professional audio systems.”

Taking everything into account, from sound quality and flexibility to price/performance ratio, ESP has invested in a range of CODA Audio systems over the last three years. Compared to the competition, concluded Bill Danilczyk: “CODA Audio is simply in a different league!”