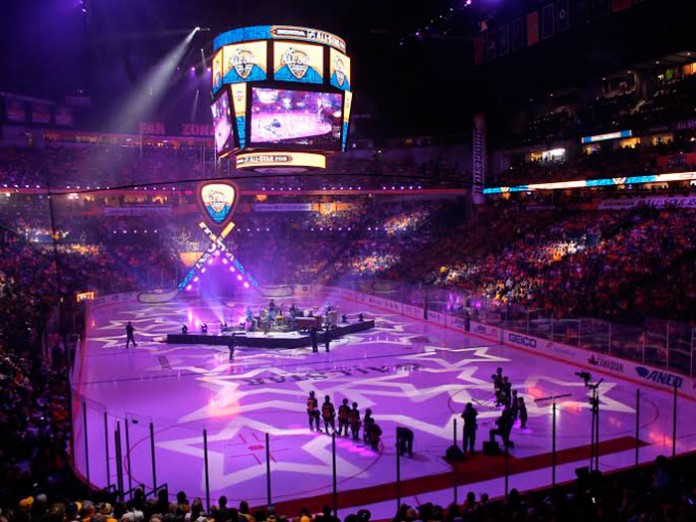 It was Nashville’s turn to host the 2016 Honda NHL All-Star Weekend, and the four-day event in Music City was packed with enough star power on and off the ice to excite thousands of hockey fans. Morris, formerly known as Morris Light and Sound, was charged with conceptualising and executing the audio and lighting installations and providing 24/7 production management at five venues during the weekend. Morris deployed large complements of Clay Paky Mythos and Sharpy Wash 330 fixtures along with grandMA2 consoles at three of the locations. A.C.T Lighting is the exclusive distributor of Clay Paky and MA Lighting brands in North America.

Matt Geasey, Visuals Department Manager at Morris, and his team oversaw the lighting design, 3D rendering and equipment specifications for multiple activities. For the free IntelliCentrics Outdoor Concert Series, part of the Bridgestone Winter Park venue in front of the Country Music Hall of Fame and Museum, he selected 90 Mythos and 30 Sharpy Wash 330s for the Honda Stage. Big & Rich kicked off the concerts on Thursday; the Eli Young Band wrapped up the festivities Sunday night.

“There were 10 acts in four days, and the rig stayed the same for everybody,” said Geasey. “Morris bought the first 250 Mythos fixtures in the US in late 2014. We use them a lot, and we love them. Their light weight, low profile and high output made them the perfect choice for the Honda Stage.”

Mythos, complemented by Sharpy Washes, served as the main lighting for all the performers. Mythos were positioned overhead on truss and on the stage floor; the Sharpy Washes also were flown.

The Bridgestone Arena was the site of the 2016 Honda NHL All-Star Game and the All-Star Skills Competition. Morris deployed 68 Mythos, all flown from the ceiling, for those events. “Once again, Mythos’s compact footprint was a factor in the arena,” Geasey said. “Mythos was key to the entertainment lighting for the musical performances during the game when we projected a custom star gobo.”

The arena’s grandMA2 complement consisted of six NPUs, two full-size consoles and one Light; they controlled lighting only for the game and skills competition.

Another grandMA2 light was installed in the All-Star Press Room where it controlled 26 Sharpy Wash 330s. “The press room required a multifunctional design for press activity throughout the weekend,” Geasey noted. “It was used for player interviews and other media interactions so it had to be on-brand for the 2016 Honda NHL All-Star Weekend and it had to be properly lit for both photography and television.”

Geasey added: “We received nothing but positive feedback on the Clay Paky fixtures during the weekend’s events.”