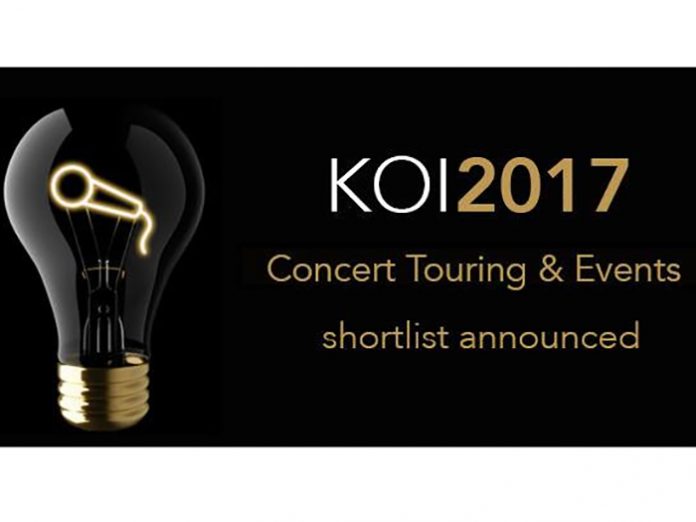 The 2017 Knight of Illumination (KOI) Awards has announced this year’s shortlist of lighting and video designers, recognised for their creative work in the Concert Touring & Events sector. The winners will be announced at the 10th anniversary KOI Awards ceremony, to be held at London’s Eventim Apollo, Hammersmith, on 17 September.

The KOI Awards was established to publicly celebrate the achievements of lighting and video designers in the sectors of Television, Theatre and Concert Touring & Events. The annual Awards are open to designers whose work has been showcased in the UK in the previous twelve months. The Awards is now one of the most celebrated nights in the live entertainment design industry calendar, with more than 500 leading creatives and professionals in attendance at last year’s celebrations.

The Concert Touring & Events shortlist is the third and final shortlist to be announced, following the Theatre and Television categories announced in recent weeks.

The shortlist is as follows:

THE AVOLITES AWARD FOR STAGE:
Paul Normandale (Lite Alt Design) for The Chemical Brothers at the Eventim Apollo London

THE MA LIGHTING AWARD FOR CLUB:
Louis Oliver and James Scott (Okulus) for You Me At Six on Night People tour at Shepherd’s Bush Empire

THE HSL AWARD FOR EVENTS:
Ben Cracknell for The Olivier Awards at the Royal Albert Hall

THE d3 TECHNOLOGIES AWARD FOR VIDEO ELECTRONIC CONTENT:
Louis Oliver and James Scott (Okulus) for Bring Me The Horizon on the That’s the Spirit tour

“We had a record amount of entries for this year’s KOI, with a wonderful variety of shows, all at an incredibly high standard,” said Allan. “The insights into the designs have been fantastic, be it from designers well-established in their craft, to those not long starting out. Our judging panel is truly passionate about giving all the shows equal consideration, no matter the music genre, event, size or budget. It is solely about the lighting and the video content design! It has been a tough job for the judging panel, with lots of debating long into the night, but the decisions have been made!”

The glittering 10th Anniversary ceremony will take place on 17 September at the famous Eventim Apollo, Hammersmith, where the KOI 2017 winners will be announced.