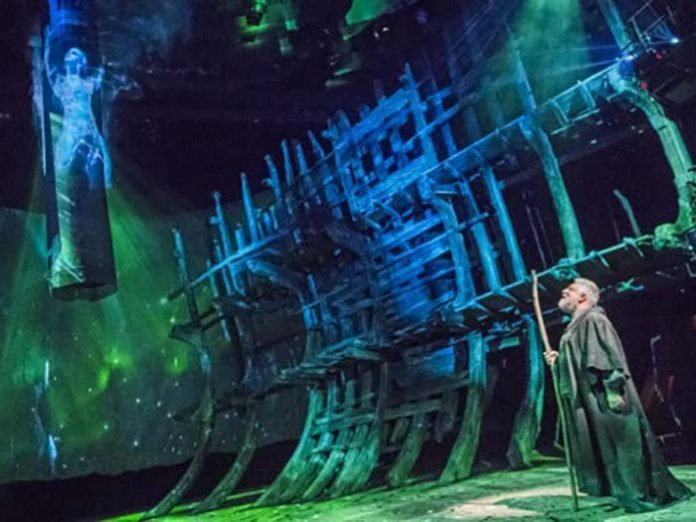 After two years in development, the RSC’s new production of Shakespeare’s play The Tempest opened to the press on 17 November 2016. The production, in collaboration with Intel and The Imaginarium Studios, has brought one of Shakespeare’s most imaginative plays into the 21st century, breaking new boundaries in live theatre performance by using the latest innovations from TAIT Stage Technologies.
RSC’s Artistic Director, Gregory Doran, and In-House Designer, Stephen Brimson-Lewis, had a clear vision for the new production. With Intel’s powerful technology supporting them, they approached Andy Serkis at The Imaginaruim Studios to use Live Motion Capture. This technology has been used with great effect in films like The Hobbit and Planet of the Apes. For The Tempest, the idea in using this technology was to project a live image of Ariel onto a moving ‘cloud’ that hovered above and around the stage.
Enter TAIT Stage Technologies, originally approached by Alan Bartlett from the RSC’s technical department, who briefed them on the productions automation requirements. As the scope of the project and the automation was refined, TAIT Stage Technologies met with Production Manager Pete Griffin and RSC Automation Project Manager Dan McDonald to discuss the project in greater detail. It became clear during these discussions that a very tight working collaboration would be needed between the two companies.
After review of products and possibilities, the RSC wanted to use a track and trolley system that TAIT Stage Technologies developed and supplied through the years on many different projects. The major difference required here was the track was to be a spiral with ever decreasing radius on the curves. The ‘Vortex’, as it became known, was integral to the flight of the ‘Cloud’. Using some of TAIT Stage Technologies existing technology, the RSC designed a new trolley capable of running on very tight curved track. Additionally, the cloud needed to raise and lower; so, the supply included motor and control for that element.
As theatre experts, the audience perspective is always at the forefront. Hence, hiding the Vortex from the audience’s view was paramount.  They used 12 curved scrims that follow the spiral of the track and raise and lower on 12 BT200 rental winches. During the production, they are projected on with video mapping technology. TAIT Stage Technologies worked with the RSC projection team using our technology to provide positional feedback from the automation with their in house system. Dan commented: ‘One of the main reasons for choosing TAIT Stage Technologies was because of their proven track record in integrating with video systems and video mapping, and this has really paid off.’
At stage level the RSC’s technical team removed most of the thrust stage to be replaced by clear perspex. Contained within the new stage are two personnel lifts using BT290’s controlled locally by pendant controllers.
The automation provided includes Au:tour control racks, Acrobat control console and, of course, the winches. Automation programmer for the RSC, Haydn Wright commented: ‘It’s been great to use TAIT-Stage Technologies on this project. The wireless track has proved really reliable – even with the amount of other control systems within the same bandwidth. When I press the start button, I have confidence in a repeatable reliable motion – It’s that confidence you need in an automation system.”
www.stagetech.com