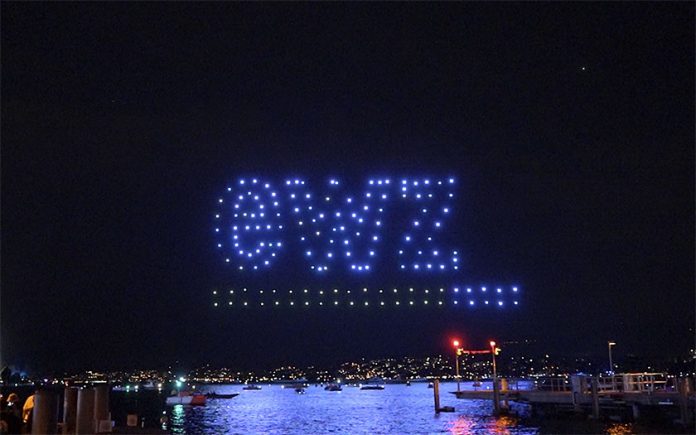 SKYMAGIC delivered a mesmerising drone light show – the first in the city of Zürich – as part of this year’s Züri-Fäscht, performing across the weekend in front of over 2.5 million spectators.

SKYMAGIC were invited by the country’s leading renewable energy provider, EWZ, to design and deliver a bespoke show, telling their story of a company at the forefront of sustainability who have powered the Festival since 1951.

Designed by SKYMAGIC’s creative team, the synchronised swarm of 150 drones was launched high into the night sky – directly from a floating pontoon in the middle of the lake that was custom built by the festival exclusively for the drone show. The explosive opening scene saw the iconic Zurich Festival lion let out a huge roar followed by a suite of bold and compelling formations, blending EWZ’s renewable message with playful touch points all synchronised to a driving, upbeat score.

The show was specifically designed with 3D formations, allowing the entire audience the opportunity to view the spectacular performance from every position around the lake.

Creative Director of SKYMAGIC Patrick O’Mahony commented, “This was a creatively ambitious and logistically complex project. EWZ and the Zurich Festival were very clear about what they wanted to achieve and the story they wanted us to help tell. Using our proprietary 3D animation suite we designed choreography rich in colour and dynamic movement. Our in-house trajectory simulation software ensured we not only filled every inch of our large performance window with motifs up to 220m in width and 500ft above the lake but also comprehensive safety analysis.”

Every show that they perform is completely individual in both design and technical setup with inherent challenges and limitations meaning that as a team they must be agile and reactive.

“For Zurich Festival this meant working between two areas separated by water involving a team of 10 and boat logistics. In addition we performed two shows per evening of the event with the absolute minimum possible time between. It has meant that we needed to even further refine our already efficient working process.”

The festival weekend was historical for Zurich and EWZ – the City’s first ever drone show where technology met sustainability inspired by a true Swiss company – EWZ.

Nicole Herzog, Head of Live Experience at EWZ commented: “After working with Zuri-Fascht for many years, it was very exciting to be able to find a new, innovative way to tell our story that stayed true to the message of sustainability.”