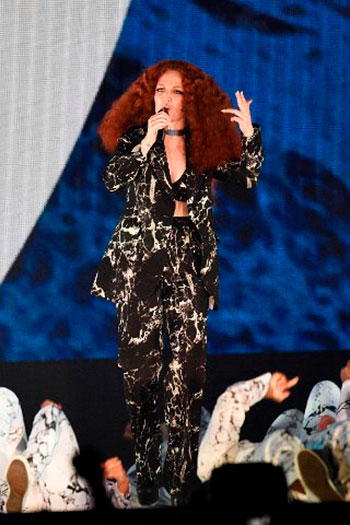 Adele scooping four awards and Lorde’s David Bowie tribute may have grabbed the popular headlines at this year’s Mastercard Brit Awards, but Sennheiser was making news of its own, supporting the event for the 14th consecutive year and helping to make the first nominee announcement from space a reality.

In technical terms the undoubted ‘stars of the show’ were Sennheiser’s wireless microphones and wireless monitoring systems. Sennheiser equipment was used by all eight performing acts, presenters Ant and Dec, for all the acceptance speeches.

The latter was a pre-recorded nominations listing read by British astronaut Tim Peake from aboard the International Space Station. For this he used a wired Sennheiser e835 microphone with SKP 500 plug-on transmitter. This had a poignant parallel with Lorde – backed by David Bowie’s backing band – performing Life On Mars using Sennheiser 2000 series IEMs.

“We use a 2000 Series mic for Jess,” says Duncan Wild, Jess Glynne’s monitor engineer. “In a live situation such as the Brits, it’s great to know that the kit on its own does what it needs to do; the RF side of it is great and Sennheiser’s support is always fantastic, from servicing to sorting things out in tight time frames. Sometimes the look for the mic can be as important as what it sounds and when we needed to have the mic chromed, Sennheiser did that for us at very short notice.”

“The show was a complete success, with all the Sennheiser equipment working flawlessly,” said Cummings. “It was great to see Adele win four awards and her performance was perfection. It made for a perfect start to her sold out world tour, which began a few days later and features the Digital 9000 system.

“It was also fantastic to see Tim Peake using the e835 wired microphone too from the ISS. Although we have supported the Brits for 14 years, there are always new challenges to overcome and new boundaries to break. The fact that Sennheiser helped Britain’s first astronaut to read nominations from ‘the final frontier’ was a real privilege.”