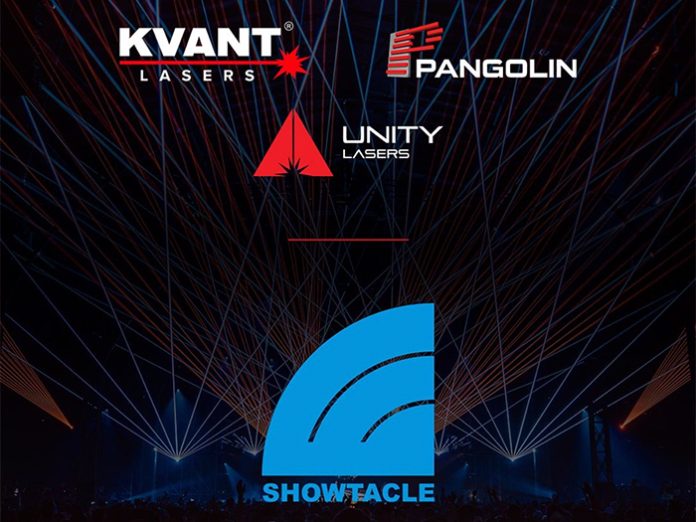 The laser and photonics industries are rapidly expanding across a wide range of market sectors, including entertainment and architectural projection, as well as industrial, medical, automotive, and manufacturing sectors. As markets continue to grow, customer needs naturally do as well. Pangolin and KVANT are scaling further to address this need, with their acquisition and onboarding of Showtacle technology and members of the development team.

Since 1986, Pangolin Laser Systems has been revered as a pioneer in the field of laser projection technology, with a strong focus on entertainment and architectural applications. Pangolin’s mission statement (to advance the utility, enjoyment, and safety of lasers around the world) reflects the company’s values of innovation, quality, performance, and reliability.

Pangolin currently holds over 53 patents for laser technologies released to market, more than all other companies in the laser entertainment space, combined. And over their 36-year history, they have emerged as the technical leader in the field, providing groundbreaking technologies to the laser projection space, year after year.

KVANT Lasers s.r.o. was founded in 1995 and is revered as a world-renowned manufacturer of cutting-edge laser projection systems and OEM laser sources (modules), also holding a vast array of patents for innovative technologies released to the laser display, entertainment, and architectural communities. Additionally, KVANT is the world’s largest integrator of COHERENT OPSL laser sources, in the laser projection and entertainment space.

Considered by many as “the benchmark” in terms of quality, performance, and reliability, KVANT products are used by the lion’s share of today’s lighting and laser professionals globally – across a wide range of notable world tours, theme parks, hotels, and events.

Pangolin and KVANT created a synergistic partnership in 2015, in an effort to further expand research and development scale, and to continue to push the envelope in terms of how lasers are used across projection, entertainment and architectural displays as a whole. Collectively the two firms employ over 98 skilled experts in the photonics space, and serve over 100,000 clients worldwide under the Pangolin, KVANT, and Unity group.

Showtacle has been a long-standing developer of laser control hardware and design software as well, for over a decade. The company founders are passionate engineers, with a strong background in embedded systems development, electrical and optical engineering, as well as software development.

Showtacle was created as a collective effort to share their passion for laser design and laser show creation, across the entertainment sector. Since their founding, Showtacle has also gone on to create sub-divisions, including their LED-Strip Studio brand, and TRON Event Agency in Slovakia.

Pangolin Laser Systems and KVANT Lasers have joined forces with Showtacle to further expand the group’s overall scope and scale of development, as well as to explore new and innovative laser projection technologies, that will allow lasers to continue to grow and expand, within the entertainment and architectural communities.

As a part of the new partnership, all existing Showtacle IP will be under the management of Pangolin and KVANT, and members of the development team will join Pangolin and KVANT, in their continued effort to serve the growing laser, and photonics industries.

The new relationship dramatically expands development, manufacturing, and resource scale, allowing the entire Pangolin, KVANT, and Unity group, to better serve both existing and new customers, across the laser and photonics space.

Showtacle products will continue to be supported through Pangolin and KVANT’s network, and existing customers will be provided migration paths. The teams have also begun further research and development projects to help better serve the market through major advancements in the field of permanent laser installations, and monitoring technologies.