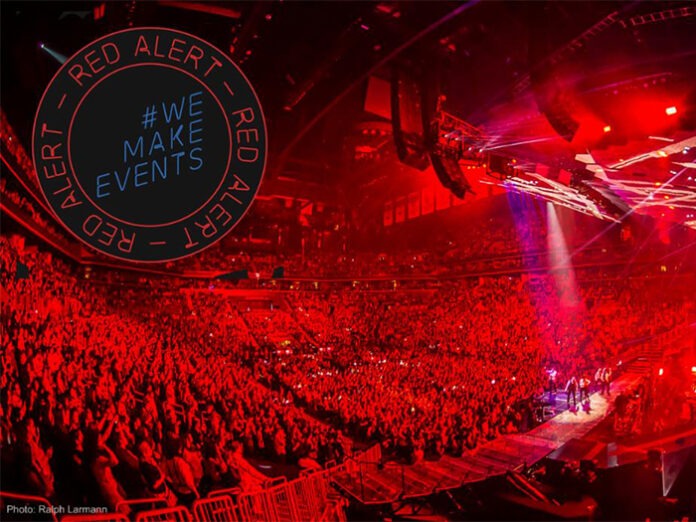 From Super Bowl performances and award shows to pivotal moments in popular culture, chances are you’ve seen Fireplay CEO, Nick Whitehouse’s work without even knowing it. The UK native established Fireplay to bring a unique and collaborative touch to the industry and to provide services that go beyond artists’ expectations to revolutionise production and design. Ahead of the #WeMakeEvents campaign, which is expected to sweep the US and Canada on 1 September, Whitehouse has issued a poignant open letter.

In a blog post he wrote the following [sic]:

“Six months ago, I stood in the middle of Bridgestone Arena in Nashville surrounded by over 15,000 screaming fans, scores of country music artists, and record company executives for the opening night of Dan + Shay the Arena Tour. Little did I know it would be the last time I attended a concert in 2020…and likely the last time we got to create a show in the music industry as we knew it.

I’ve been obsessed with live music and theatre since I was a child. In my early teens, I made it onstage to perform in front of 5,000 people. As I stepped onto the stage, something amazing happened: the lighting, audio, and production staff that no one else saw took my performance and turned it into something magical. I had no idea these people existed, what their crazy, futuristic equipment was, or how they did it. But at that moment, I knew that I needed to find out – and that was the moment I knew exactly what I wanted to do with my life.

In the late nineties, being a roadie wasn’t a considered a real job, let alone a career choice. There were no schools that taught it, and no one could offer any advice on how to get onto a tour. The job description was a mysterious life of sex, drugs, rock and roll, and endless parties with rock stars. The reality was anything but glamourous. Getting started in this business is tough – a real “work your way up from the bottom” kind of job. I volunteered for years, lived in a haunted dressing room in an abandoned theatre, worked weeks at a time with no sleep for hardly enough money to eat. I searched for buried cables at festivals covered in mud and shit, wading through overflowing Porta Potties, climbed thin trusses high above venue floors to fix or re-color lights with nothing but a basic rock-climbing harness. I took any and every roadie gig that came my way to build up the specialized skills and knowledge I needed to move up the ladder.

In one of those right-time-right-place moments that are pretty much the only way to get a break in this industry, I met someone who saw my potential and was willing to teach me. He became my mentor. By 19, I was on a European tour as a lighting designer for the first time. (Technically, because it was only me, I was the truck unloader, rigger, stagehand, lighting tech, lighting operator, troubleshooter, and maintenance guy all in one.) It meant long grueling hours: a 6 a.m. truck tip, set up for sound check by 2 p.m., show at 8 p.m., with de-rig and load out finished by 2 a.m. I showered in disgusting dressing rooms and the band and crew all slept on one moving bus (with 16 bunks) as it drove overnight to the next venue, where we would do it all over again the next day.

It was unbelievably hard work, but I loved it. We – the band and the crew – entertained thousands of people, brought smilies to their faces, and removed them from real life for just a few hours of pure immersive entertainment. It was my dream job.

Twenty-two years later, a lot has changed. I’m now a CEO in what has evolved into the multi-billion-dollar live music industry. When Napster, Apple, and then Spotify introduced streaming, overnight, we flipped from touring to promote album sales to those tours being the major source of income for all artists. Each tour is treated like the multi-million-dollar corporation it is, often bringing in hundreds of millions of dollars in ticket sales, merchandise and concessions. Whereas album sales used to be the way artists built their wealth, the income produced from records sales and streaming now looks like a rounding error in their live touring business.

The extravagant productions we design to wow, invoke emotion, and deliver life-changing experiences to fans are each totally unique. Each event, big or small, has one thing in common – one thing that by the very design of what we do is hidden. It’s the magic, the secret sauce, if you like. It’s the uniquely talented people who support our vision: the touring road crew, creative teams, local stagehands, security, bus and truck drivers, caterers, riggers, electricians, engineers, seamstresses, runners, teamsters, vendors, manufacturers, and the list goes on. Without this dedicated, highly skilled, professional workforce who have trained their entire lives to execute their small part of any production flawlessly night after night, no event would be possible.

It’s their job to be invisible, to hide in the shadows behind curtains or backstage. They don’t get to have sick days or to be late. They run on little to no sleep. Often, one mistake could endanger lives, and every little detail of their work has to be perfect night after night; there is no room for compromise. Without every single one of them working in unison, nothing you have come to expect from a live concert would be possible.

Six month ago, all live music stopped. We were the first industry to really fully shut down, and overnight, business evaporated for everyone. It’s estimated that 96%, or as many as 12 million people in the live events industry are currently unemployed, furloughed, or have lost up to 90% of their income.

Live events will be the last to return and it’s looking bleak. Current estimates predict anywhere from 6 to 12 months before we are able to fill an amphitheater or arena, sustaining increased financial losses in the tens of billions of dollars. Let that sink in twelve million people with absolutely no way to earn a living doing something they trained their entire life to do, and that’s just in the U.S. The live events industry across the entire world is in the same situation.

Perhaps if we would have returned to live shows in September or October this year, which were the initial estimates, we would have stood a chance of getting through it. But nothing till summer or fall 2021 – an entire year to year and a half without a single dollar of income – is simply not survivable by any person, company, or industry without help, no matter how well-prepared they are.

To make matters worse, most of these crew members are freelance, self-employed independent contractors, so government benefits in multiple countries simply don’t cover them or are insufficient. Many haven’t claimed anything yet and have tried get through on their own because it’s not in their DNA to rely on handouts, and information circulating has been that we’ll be back soon. Because of this, a vast majority are not showing up in unemployment figures. In addition, it’s hard for them to get another job, as outside employers generally don’t understand the skills they have. Sadly, the reality is setting in; even the most hardened roadie is at a point where savings have dried up, bills are mounting, stress is rising, mental health is a real issue, and there is no end in sight.

While some governments have recognized venues and are investigating funding to save venues, it’s imperative that this funding also extend to the lifeblood of the industry: the people. No matter how famous or cool a venue is, it’s just a building. It’s the people that make it work and bring it to life.

So for everyone reading this who loves live music, misses concerts, festivals and tours: it’s time to bring these men and women of the entire backstage industry out from behind the curtain and make enough noise to get them recognized and get them the support that they so desperately need. If action isn’t taken immediately, when your favorite venue opens back up again, there just might not be anyone left to put on a show.

On September 1st, the #wemakeevents effort will light up buildings red across the U.S. to raise awareness of our dire situation. I encourage anyone who works in the industry or who loves events to get involved and share. Creating a spectacle is what we do best; let’s light up this country bigger and better than ever before. But that’s not enough; we need you to write, petition, and call your government officials to let them know the live industry needs help. We don’t have lobbyists or inside officials like other big businesses. We need the fans who love what we do to get on board to help.

Anyone reading this who has the budget to put on any kind of event, consider doing it now and spreading word around outside your normal circles. Record companies with promo budgets for all those albums being written in lockdown – let’s spend them putting as many people back to work as possible. Anyone wanting to do a virtual event – let’s do it in style, as there is an endless supply of talent out there just waiting to work. Artists who have received support – let’s make sure it’s passed onto the crews who have supported you for years on the road. Most importantly, reach out to friends and co-workers. Check on them to see if they need help or someone to talk to or to direct them to the amazing team at The Roadie Clinic.

Finally, wear a mask! We may be a vast industry, but we are a small, close family, and we’re in this together. It’s going to be tough, but we will get there.

Even with all the support we need when we do emerge from this pandemic, we are going to be facing a very different landscape. The very essence of music and live events will have changed considerably. With this complete shutdown, we have the opportunity to redefine and guide a new normal in the design, creation, and economics of these events which will define how live music as a whole is consumed in the future. The willingness of all fans to attend in person will take time to recover. Getting artists as close to as many fans as possible, capacities, chair spacing, and immersive VIP areas will all need to be revised, which will all have a ripple effect to the bottom line. We may have smaller budgets to work with, but that’s not a bad thing. That pushes us to be better, more efficient. As one big team, we need to get back to innovating, educating, creating, healing, and pushing ourselves now, so when we are able to bring back in-person events, we’ll bring with us a whole new era of live events – one which is even better, richer, and more inclusive for fans, artists, and crews alike.”

Fireplay CEO, Nick Whitehouse, has learned his craft over the past 20 years by designing and touring with artists such as Coldplay, JAY Z, Beyonce, Rihanna, and Britney Spears. His bold style and innovation have won the admiration of music’s most prominent figures and a 15-year collaboration with Justin Timberlake.