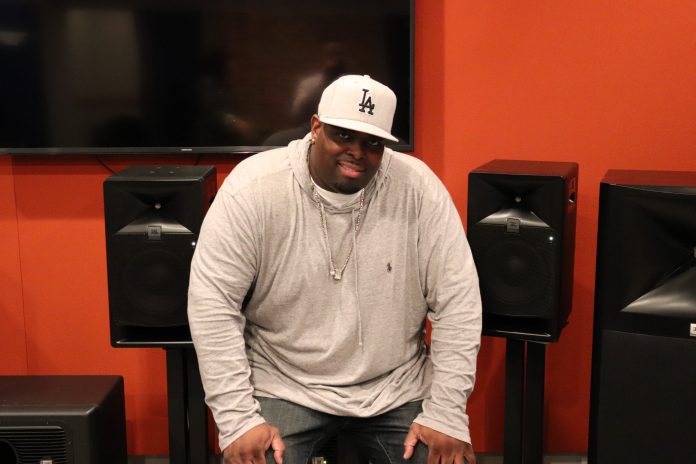 In order to deliver studio-quality live mixes for some of music’s biggest stars, renowned front-of-house mixer Kyle Hamilton uses JBL 708P monitors in rehearsal to craft a solid foundation that translates to any venue.

Kyle Hamilton founded his company NeverSleep Productions in 2004, after working in live sound since 1993. In that time, he has become a go-to touring FOH engineer for artists including Janet Jackson, Prince, Usher, Rihanna, Kendrick Lamar, Pharrell Williams and more. Hamilton’s skill has earned him two Grammy Awards—Best Traditional R&B Vocal Album in 2001 for his work on Gladys Knight’s At Last, as well as Best Pop Solo Performance in 2015 for mixing Pharrell’s #1 hit “Happy” live. In 2018, he was won the Parnelli Award for FOH Mixer of the Year, a prestigious honour for live sound professionals.

Hamilton is known throughout the music industry for his ability to recreate the sound and energy of chart-topping hits in large-venue settings. The pop, hip hop, and R&B act he specialises in demand a tight, polished sound, and Hamilton have developed a system for delivering high-quality results with maximum consistency. It all starts in the rehearsal studio, where Hamilton works diligently to get the mix sounding as close to the record as possible.

“Usher, Pharrell, or whoever I’m working with—they want to hear the show as a record,” said Hamilton. “So I multi-track the entire rehearsal while I’m in the same room as the band; let them do their thing. Then when they have a break, I play back what I’ve captured and then subsequently mix it as I would do in the studio. So then, at the end of the day when you add a PA, you know your foundation is right.”

Hamilton has been using this technique to great effect throughout his career, but back when he first signed on as Usher’s FOH engineer, he was determined to find the absolute best monitors for the job. Working directly with HARMAN, Hamilton compared dozens of models in on-site listening tests to help him deliver the best live mixes possible. According to Hamilton, the natural sound of the JBL 708P put him in the right headspace to fully experience Usher’s music and do it justice with a proper live mix.

“When I listen to these speakers, for this genre of music, it gives me the perspective of listening to the record,” said Hamilton. “When I listened to them in their flat response—no EQ, just straight flat speaker—it took me back to when I first heard his body of music, mainly the Confessions album,” said Hamilton. “I have to be in the same mind space, and when I sat down and listened to them it was just a nice, warm, kind of fuzzy feeling. It was not harsh. It was just everything I was looking for in order to do what I needed to do for this.”

For Hamilton, that warm and fuzzy feeling is crucial. Having accurate speakers with the right vibe and useful features like onboard DSP and digital I/O gives him the one thing he values most of all in live sound—consistency.

“They allow me to be consistent,” said Hamilton. “For a nice eight-inch near-field, they’re definitely on the cutting edge, and HARMAN has found something beautiful in those cabinets.”

Hamilton is currently on tour with Pharrell, with major upcoming festival appearances including Something in the Water, BottleRock Napa Valley and Essence Festival scheduled for this spring and summer.