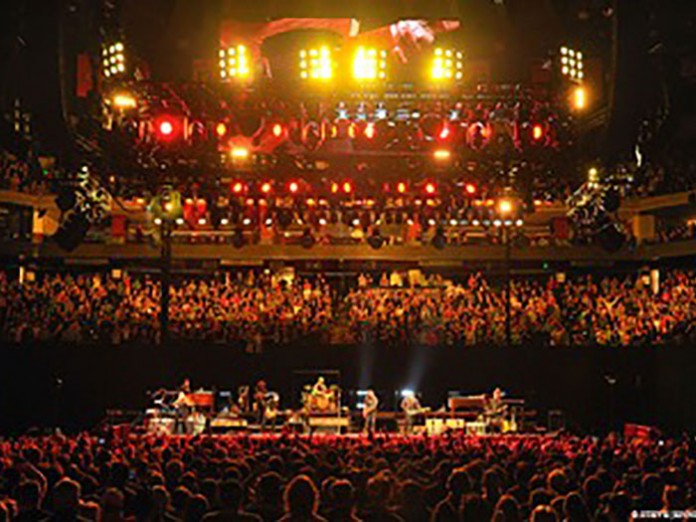 The River Tour by the legendary Bruce Springsteen and the E Street Band calls forth powerful musical memories. Celebrating the 35th anniversary of the Boss’ seminal The River recording and the recent release of The Ties That Bind: The River Collection box set, the concert features full-length sequential performances of the 1980 album’s songs. Mindful of the historical significance of the tour, lighting designer Jeff Ravitz was seeking to evoke images of the classic album’s original era, yet at the same time, he wanted something that looked new and vibrant to reflect the energy that his client brings to the stage. He was able to do both with a uniquely framed configuration of COLORado 1-Tri IP LED pars from CHAUVET Professional.

The longtime LD for Bruce Springsteen and the E Street Band, Ravitz had used the 42-watt COLORado 1-Tri IPs as “audience blasters” for his client’s previous Wrecking Ball Tour, configuring them in 7-unit frames. He repurposed the RGB LED pars for The River Tour, arranging them in a 9-unit customised frame engineered by Morpheus Lights of Las Vegas that has been dubbed “The CP-9.”

Ravitz positioned 16 of the CP-9 units across upstage trussing for The River Tour. He explained how the new configuration fit the tour’s concept. “This tour commemorates The River album and its re-release in the new boxed set,” he said. “So there was a desire to harken back to something that felt classic ’80s. I was determined not to succumb to old par-can technology and create just a plain retro look. I wanted to do something more by using modern equipment to create the wonderful feeling of the ’80s, but at the same time do it in a way that looked new and dynamic. You might say that I wanted to create a look that would have been appreciated back in the ’80s if they had had the technical advantages we enjoy today.”

This design goal led to the creation of the CP-9, which configures nine COLORado 1-Tri IP pars in three rows of three. “As I was thinking about what I wanted to do for The River Tour, the idea popped into my mind that the 9-light was ever-present in those days,” said Ravitz. “Of course the fixtures back then were inherently limited. The CP-9 concept gives me all the variety that an LED par like the COLORado Tri IPs can provide – and it gives it to me in a larger, over-scaled package that creates a very powerful appearance when you see 16 of them spread out across all the trussing.”

Ravitz is scattering the new CP-9s throughout the lighting system to light the entire audience – from behind the stage, around the sides, all the way to the far front-of-house. This creates an immersive environment that is able to ebb, flow and rise with the raw emotional power of the show, which typically lasts over three-and-a-half hours and features 30 songs.

“As opposed to a moving light, our CP-9s are always focused on the audience,” said the LD. “When something happens in the course of the show that prompts tour lighting director Todd Ricci to light the crowd, the COLORado Tri IPs are ready and waiting. Our grandMA2 operator Brad Brown can quickly choose from the great spectrum of colours the COLORado Tri IPs offer, so we’re always able to reflect the moment.”

On the subject of colours, Ravitz notes that he’s using a rainbow of them on The River Tour. “Over the course of a three-and-a-half-hour-plus show, every hue and tint you can imagine is attempted at one point or another,” he said. “But, I’ve got to admit that we use a lot of blues — and we’re always trying for variety and degrees of saturation. So far, we’ve been quite successful in creating a great mix of blues with the COLORados. Plus they’ve always been very bright.”

Ravitz is also pleased with the rugged design of the pars. “The COLORado Tri IP is rated IP66, which helps us considerably for our outdoor shows,” he said. “However, lifting and mounting the CP-9s, which are made of nine of these rugged built pars takes some muscle. Aside from being great technicians, our crew, Brandt Gentry, Mark Donahue, Jimmy Duke, Tom Marty, and Adam Beasley, deserve credit for handling these units.”

Credit too must also go to The River Tour’s well-crafted design. Lighting a concert by a legend is never easy, especially when it lasts half a workday and evokes memories of one of rock’s most iconic albums. Still, Ravitz accomplished this task in flying colours, giving a distinctive new twist to a beloved old look. In the process he spanned generations with lighting just as surely as his client does with music.