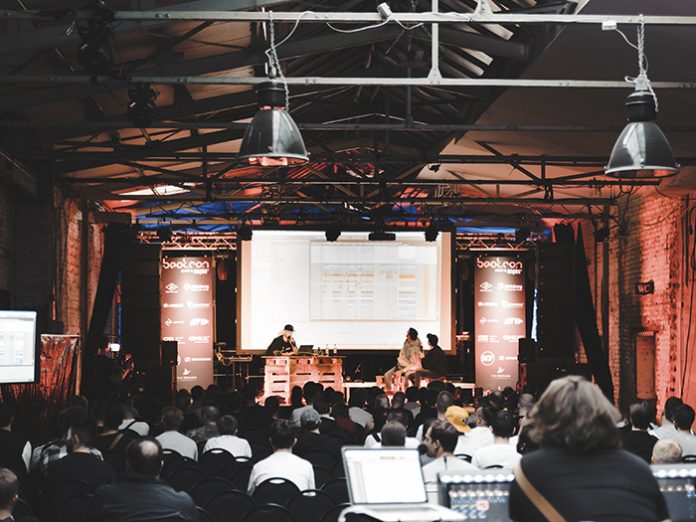 Beatcon took place for the first time this year and sees itself as an information platform around the production of hip-hop music focusing especially on the technical aspects. Italian sound enforcement specialist RCF, who supported the event not only as a sponsor but also with the equipment, took care of the sound. On both stages and during the workshops and master classes Beatcon trusted in an HDL 30-A line array system, several SUBs and TT MKII modules.

During this first edition of Beatcon, taking place in the event location Boui Boui Bilk, the top producers of the scene showed their skills and workflows on two stages – from producing the beats, vocal recording, vocal editing, sampling to the studio and live mixing. The culmination of each day was a live performance by an artist on the SNIPES Stage. The event offered a very versatile program that required a PA able to reproduce a wide variety of formats, sounds and situations flexibly. Therefore Beatcon chose equipment from RCF.

Event service provider Tontechnik Kaufmann with owner Christofer Kaufmann used an HDL 30-A line array system for the SNIPES Stage. 7x HDL 30 modules were placed on 2x SUB 9007-AS (in cardioid mode) left and right of the stage. Additionally, 3x SUB 9007-AS were at the centre before the stage. Two RCF TT 22-MKII served as sidefills. The artists on stage used TT 25 SMA monitor wedges.

Because of the event’s concept, with live performances, workshops, discussions and dialogues, the event organisers required a PA that delivers perfect results both in terms of music reproduction and speech intelligibility. During the event, the HDL 30-A system and the entire audio installation showed their flexibility and high-performance.

The fat basses within the hip-hop tracks made their way through the live mix perfectly. The speeches, discussions and dialogues, enriched with many sound examples, were crystal clear and intelligible. Tontechnik Kaufmann used RCF’s own RDNet software tool to control the system completely. All components are equipped with FiRPHASE technology. The special FiRPHASE filters allow achieving coherent distribution of sound for all listeners without phase distortions, ensuring minimum latencies to the system.

The RCF HDL 30-A is a compact bi-amped two-way active touring system for medium to large events, both indoors and outdoors. It features two ten inch woofers and an impressive four inch titanium compression driver. The time coherent waveguide results from in-depth research and design. HDL30-A is the first line array in a composite cabinet with a zero-degree phase and ultra-linear amplitude response.

The built-in 2200 watt class-D amplifier delivers excellent playback clarity and up to 137 decibels SPL max. The RCF HDL30 -A features state-of-the-art RCF transducers with neodymium magnets. Considering its acoustical power, it has a remarkably low weight for easy handling and flying.

Beatcon’s second stage, Beatcon Stage, with only workshops taking place required a smaller PA. Therefore two systems comprising an RCF TT 22 MKII module, clocked on a SUB 8003-AS II, were sufficient. A perfect combination, balancing the presentations and sound examples during the workshops.

As a third location, the lounge was the place for master classes, where participants could work in small groups with hip-hop producers tweaking their beats and sounds. The direct contact to and the feedback of the lecturers was an absolute plus for the participants. Two sets of RCF’s portable sound system Evox 8 provided the perfect sound reproduction.