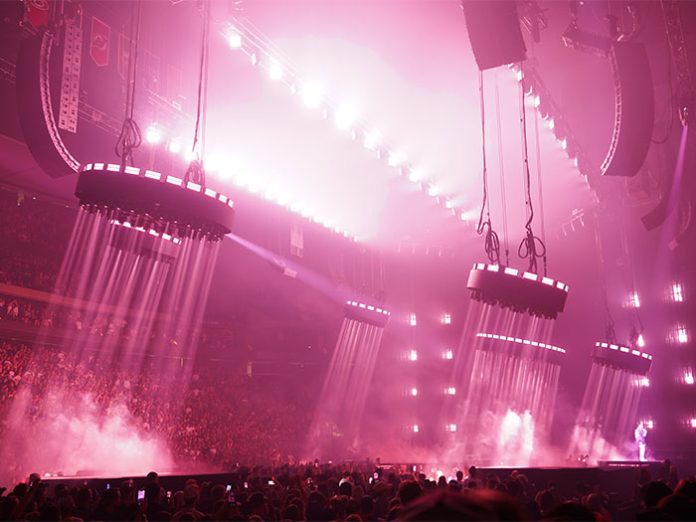 Post Malone’s Twelve Carat Tour is in support of his new album, Twelve Carat Toothache. The North American tour kicked off September 10 in Omaha and will wrap in mid-November with a pair of dates in Los Angeles.

The new tour reunites Malone with Dan Norman, Owner of LA-based Evolve Lights, Inc., who serves as his Lighting Designer and Technical Director. Norman previously designed one-off shows and a festival run for Malone last year, acted as the lighting designer for his Billboard Awards 2020 performance, and assisted on Malone’s Runaway Tour in 2019.

Norman has a history of using Ayrton fixtures having deployed 52 MagicBlade-FX units for Malone’s festival run and an array of Khamsins, Diablos, Huracans and Intellipix on other gigs.

MagicPanel-FX features a unique optical zoom system and is comprised of a 5 by 5 array of squared lenses; it offers exciting creative possibilities for both 2D graphical effects and, with its powerful beam, extraordinary 3D volumetric effects.

“As Ayrton moves forward with LED sources they’ve become my go-to product line,” says Norman. “I find their color mixing to be more accurate than a lot of other fixtures; I’m super happy with the color mixing on their spots and profiles.”

For The Twelve Carat Tour the Post Touring creative team approached Norman with a design of seven circle deck stages connected by runways. “Post Malone enjoys walking around and communicating with the audience, so the individual 12-foot wide stages put him as close as possible to them,” Norman explains.

In the same way that the runways connect the stages, Norman was looking for a fixture that would connect the six circular overhead, automated lighting pods to the stages, which can be as much as 60 feet apart. He chose 56 MagicPanel-FX fixtures, supplied by PRG, mounted on Tyler GT truss above the runways, which create a wall of beams that form illuminated pathways from stage to stage. “They act like runway top lights and also create nice streaks of light,” says Norman.

“The MagicPanel-FXs are an awesome fixture that work with the overall design of the show. We have circle deck stages and long rectangular runways so I didn’t want a circular fixture overhead. Since MagicPanel-FXs are square-facing fixtures they match up well with the runways. With their pixel flexibility I can create a shape with just the outer ring or cue a few pixels at a time for a small, quite intimate look for specific moments instead of a bright wash. By contrast, used full force the MagicPanels can make our big 750-fixture rig look even more massive.”

An additional 32 MagicPanel-FX are positioned behind the 76 x 38-foot blow-through LED wall upstage in an 8 by 4 configuration. “They are attached to vertical Tinker ladders spaced every eight feet to make a square grid so they blow light through the LED screen,” Norman says.

About half of Post Malone’s songs feature a kind of audio glitch motif in their tracks that the Post Touring creative team wanted to integrate into the design. Norman replicates that with the blow-through fixtures. “We can do quick blips and super-fast strobe hits with a few pixels at a time, very small,” he explained. “They create a very grounding look that carries through the show. Not a lot of other fixtures are able to create those effects.”

He also enjoys the versatility of the zoom system. “I can do single pixel glitches in a wide zoom to give you that delicate eye candy effect, then zoom down and use all the pixels together to create tight shafts of light that spin around the arena. The MagicPanel-FXs are great for crowd interaction too, since we don’t have conventional blinders, the wide zoom lets us get enough coverage to light up the crowd for Post Malone to see them all.”

“I’m super happy with these fixtures,” Norman declares. “They’re great units that do everything we need to do.”

Norman is a long-time grandMA user who also owns a full-size grandMA2. “I’m starting to prefer the changes in the grandMA3 hardware, like the screens and buttons,” he reports. “The keyboard is more centrally positioned, and I use a double line of macro buttons all the time. I feel my programming speed has increased with a lot more screen space and the extra macro buttons.”

Production manager Dennis Danneels was the glue that held all the departments together. Eric Christian was the Associate Lighting Programmer and Steven “Six” Schwind was the touring Lighting Director.