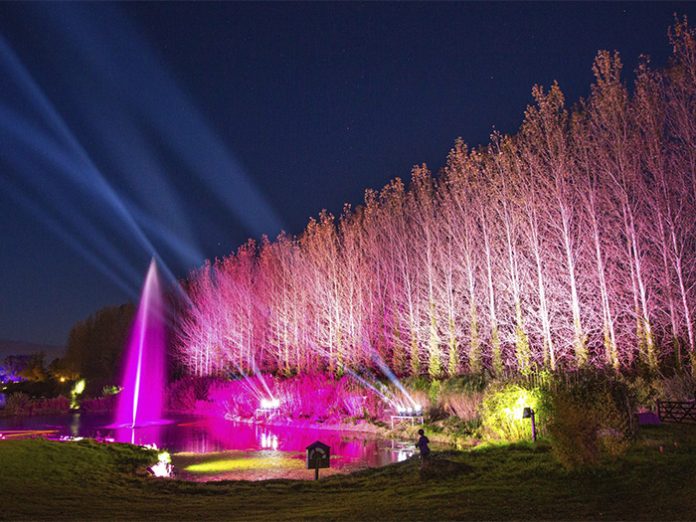 A variety of ADJ’s IP65-rated moving head luminaires and LED wash fixtures have been used over the past three months to transform an Irish country estate into an enchanting festival of light. Wonderlights featured a night walk experience that allowed visitors to roam through a variety of displays and art installations that brought together light, colour, nature and Irish folklore tales.

Wonderlights ran throughout October and November, before taking a break for the holiday season. It then returned for a limited run at the end of December 2019 and the beginning of January 2020 due to popular demand. The immersive festival of light allowed visitors of all ages to walk at their own pace around a 2 kilometer trail that passed through a variety of different themed areas and displays. Each area featured its own looping musical soundtrack, and many incorporated sculptures or video projections, that told stories and gave each part of the experience a unique atmosphere.

The extensive inventory of ADJ equipment used for the event was supplied by Dublin-based Light Sound Service, which is owned and operated by experienced audio and lighting professional Brendan Kenny. More than 80 ADJ fixtures were deployed across a variety of the themed areas of Wonderlights, including 22 of the new Hydro Beam IP65-rated moving head fixtures that Light Sound Service purchased especially for the project. Having a long history of using ADJ fixtures, and already owning the company’s IP-rated wash fixtures, the decision to invest in the Hydro Series was an easy one for Brendan.

“I’ve been a customer of ADJ for over 15 years, since first discovering the brand at the Frankfurt Prolight+Sound exhibition in the early 2000s. I can honestly say that ADJ’s products have progressed leaps and bounds over that time, and especially over the past few years. ADJ has evolved from a company known for small DJ products to now offering a complete range of professional lighting fixtures. I really can’t fault these latest IP-rated products that I used for Wonderlights, which really have been put to the test over the past three months. Those fixtures have been outside in the cold and rain since we got them in early October, because after the first run of dates we moved them to be used for the Christmas event at the same venue and then put them back into position for the extra Wonderlights nights. So they’ve been outside in the winter weather for three solid months and we’ve not had a single problem with any of them.”

The largest deployment of ADJ fixtures for Wonderlights was around a lake, which features a tall central water fountain. Brendan and his team erected two platforms behind the lake, one on each side of the fountain. Two Hydro Beam X2 and four Hydro Beam X1 fixtures were then positioned on each platform and programmed to shoot beams up into the sky and out over the lake towards the audience, utilizing the mist of water generated by the fountain to enhance the beam effects.

ADJ’s flagship IP-rated moving head fixture, the Hydro Beam X2 is powered by a 370W LL Osram Sirius HRI discharge lamp focused through precision-engineered optics. It generates a piercing 3-degree beam that is ideal for creating mid-air effects either outdoors or in large inside spaces. Packed with features, it offers both 8-facet linear and circular prisms, as well as a frost filter, rotating and replaceable GOBOs, and a 14-position colour wheel that includes a four-way split filter.

“The Hydro Beam X2 and X1 are both really nice fixtures,” comments Brendan. “The X2, in particular, is incredibly bright. Even when we were using the 8-facet prism to break up the beam, it could still be seen in the night sky from over 2 kilometers [more than a mile] away! For its size and price point, the X1 is also a great fixture. With that on an open beam it complemented the X2 with the prism very nicely, and allowed us to provide the customer with a good number of moving heads for their budget.”

To complement the lightshow created by the ten moving heads, which were programmed to scan slowly over the lake and across the sky in time to an ambient soundtrack, Brendan used nine of ADJ’s 32 HEX Panel IP LED wash fixtures to illuminate a row of trees behind the lake. Each of these packs in 32 by 12W HEX (RGBWA+UV) LEDs, arranged into eight individually-controllable sections, to generate a powerful wash of light in an almost limitless palette of colours. For Wonderlights, the fixtures were programmed with colour changes that flowed across the nine units from one side to the other, which created a vibrant backdrop to the fountain and moving beams.

“The 32 HEX Panel IP is an absolutely fantastic light, with a nice tight beam angle,” states Brendan. “I also like that it comes with a diffusion filter that easily clips on the front using a magnetic frame, which came in very handy for Wonderlights. Because of the narrow gap between the back of the lake and the line of trees, the fixtures were only around 12’ away, so we used the filter to increase the spread to get good coverage across the whole height and width of the line of trees using only nine lights. The vibrant colours from the 32 HEX Panel IPs really made those trees come to life. And, remember, this was in the dead of winter, so there were no leaves on the trees to catch the light, yet the fixtures still really lit them beautifully.”

Another area of water located within the estate was also used for the event, where a special fountain was installed which could be used as a screen for video projections. To enhance the footage of sea creatures displayed on this water screen, the Light Sound Service team used four more ADJ Hydro Beam X2 units. These were programmed to move around the edge of the video projection in such a way as to catch the overspray from the water screen to enhance the beam effects, but without obscuring the video projection. In this area Brendan made full use of the fixtures’ GOBO patterns, colours and prisms to create a myriad of colourful beams that danced around the sides of the video footage.

ADJ’s popular 12P HEX IP and 18P HEX IP IP65-rated LED par fixtures were used to provide illumination across the Wonderlights site. In particular, 16 of the 12P HEX IP units were used within the ‘Dancing Trees’ area. Each fixture was positioned at the base of a different tree within a wooded glade which the trail passed through. These were programmed to change colour in time with an up-tempo piece of music to create the impression that the trees themselves were moving to the beat.

“Both the 18P HEX IP and 12P HEX IP are real workhorse fixtures, which are very flexible and can be used in lots of different ways. One of the things I particularly like about them, and the same goes for all of ADJ’s IP-rated fixtures, is that you can use a regular DMX cable if you need to. Some IP-rated fixtures I’ve come across need special IP-rated connectors, which can cause problems if you don’t have enough for a particular job. For this event, because the fixtures were being left outdoors for months, I bought IP-rated DMX cables. But if I were using them on a one off gig, and didn’t have enough of the IP-rated cables to hand, it’s good to know that I can use regular DMX cables to get the show up and running if needs be.”

Finally, four additional ADJ Hydro Beam X1 fixtures were used in another wooded area that Brendan nicknamed ‘Unicorn Alley’ because of the large unicorn sculpture covered in tiny light bulbs that was positioned at its centre. To create a unique atmosphere in this part of the trail the Light Sound Service team hung mirror balls from the branches of trees that reached over the path and used the piercing white beams from the Hydro Beam X1s to illuminate them. These were mounted on top of Duratruss totems, each created from a piece of DT 34 quad truss attached to a weighted base plate. Because it wasn’t practical to install rotators for the mirror balls, instead they were hung securely in the trees and movement was generated by the lights themselves. The heads were each programed to scan up and down a ball and then switch to another, which caused the reflected beams to move and jump too.

Having recently finished its extended run, Wonderlights proved to be a huge success, with thousands of visitors enjoying the magical walkthrough attraction. It also served as the perfect road test for the new Hydro Beam fixtures, which performed flawlessly despite being subject to continuous cold, wet and windy conditions for a prolonged period of time.