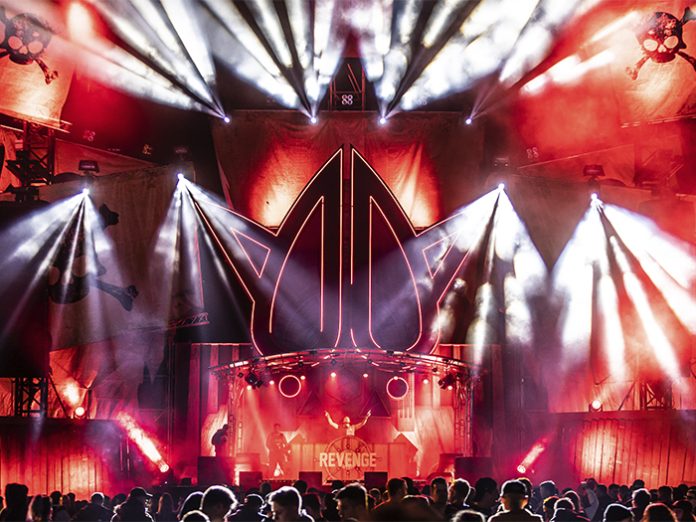 A significant quantity of ADJ fixtures were supplied by production company Spectrum AV for two of the stages at the Rebirth Festival, a huge three-day hard dance event which took place in The Netherlands in April.

Six of the festival’s seven dance arenas were unclosed by large circus-style tents, while the final performance stage was outdoors and open to the elements. For this, ADJ’s IP65-rated Hydro Series moving heads and static LED-powered wash fixtures were utilized, ensuring that the lighting rig would be unaffected by any adverse weather, including the storm that hit the festival site during buildup.

With the tagline of ‘Reunite Again’, the 2022 Rebirth Festival was one of the first largescale outdoor dance events to take place in the Netherlands following two years of pandemic-induced restrictions. It also represented a reunion between the organizers and production company Spectrum AV, which worked on the festival in its early years. However, the event grew extremely quickly and required a scale of production beyond what Spectrum was capable of at the time. A large production company took care of all of the stages at the festival in the intervening years, but following the pandemic decided to refocus their business on only larger stages. Therefore, for this year’s event, they recommended that the organizers brought back Spectrum to handle the midsize stages. This was partially because of their positive experience of working with them elsewhere and partially because Spectrum AV’s business model focusses exclusively on these medium-sized stages.

“The biggest stages at these festivals are often driven by the riders of headline artists, which means we would have to rent in different fixtures for each show,” explains Spectrum AV’s General Manager, Lex Willems. “For these mid-level stages – which are still pretty big – our clients are happy to use the equipment we have in stock, which are all ADJ fixtures. This allows us to maximize our return on the investments we have made and to use equipment that we know we can rely on. This is the sweet spot for our business and how we plan to grow. We have no desire to take on the bigger stages, we just want to do more and more of these mid-size stages and events.”

For the 2022 Rebirth Festival, Spectrum AV provided the lighting and audio production for the fourth and fifth stages. Significant to winning the contract was the company’s extensive stock of ADJ IP65-rated lighting fixtures, as the fourth stage was located outdoors with a set design that provided only minimal cover for the DJ booth and absolutely no protection from adverse weather conditions for the lighting rig.

“As well as our previous relationship and the recommendation from their other supplier, one of the main reasons the client chose us for this event was our stock of IP65-rated Hydro Series fixtures,” confirmed Willems. “For this size of stage, other production companies use regular fixtures with rain covers, so the client was attracted to the prospect of moving heads that could be used outdoors without unsightly covers or inflatable plastic domes.”

The set design for the stage was themed around a pirate ship, with masts supporting giant sails emblazoned with skull and crossbones also providing the rigging for the stage’s lighting fixtures. Twelve of ADJ’s large format IP65-rated Hydro Beam X2 moving head fixtures were positioned in groups of four, spread across the top of the three biggest sails. One of these was positioned behind the DJ position, with the other two flanking it at jaunty angles. Powered by a highly efficient 370W LL Osram Sirius HRI discharge lamp focused through precision-engineered optics that produce a razor sharp 3-degree beam, the Hydro Beam X2 creates piercing aerial effects designed specifically for outdoor stages.

“I think the X2 is a revolutionary fixture,” enthused Willems. “It was the first IP65-rated moving head beam to hit the market at a price point accessible to small-to-medium-sized production companies. It is a real powerhouse when it comes to output, so it was ideal for use on this large outdoor stage. However, I think it is fair to say that the size and weight of the X2 mean that it isn’t the fastest mover, which is particularly relevant for hard dance events like this that require high energy lighting effects. Fortunately, our Senior Project Manager, Sjors Erkeland, was responsible for the programming and was able to use the fixture to its utmost potential to create rapid effects that didn’t require very fast movements. That said, because speed of movement is particularly important for many of our events, we are very excited about ADJ’s new Hydro Beam X12. This offers the same robust IP65-rated build, competitive price, and punchy output as the X2 but with lightning-fast movement, which makes it the perfect fixture for us. We have already placed our first order and I’m sure we will invest in even more fixtures over the next year.”

The lighting design for the stage also utilized twelve of ADJ’s Hydro Wash X19 LED-powered moving head wash fixtures. Pairs were mounted to each of the two highest ‘masts’ of the pirate ship, while the remaining eight fixtures were spread across the stage itself: four on the main level and two on each of the risers positioned to the sides of the stage. Each Hydro Wash X19 features nineteen Osram 40W 4-in-1 RGBW LEDs and a motorized zoom mechanism that allows for a beam angle variable between 6 and 40-degrees.

“The power of the X19 is incredible,” stated Willems, “which is especially important as we move towards the summer and more and more of these events will be in daylight. As you can see from some of the pictures taken at Rebirth, the X19 is powerful enough to be seen clearly even before the sun goes down. It is a really versatile fixture that can be used to create a very narrow beam or a wide wash and, of course, the IP65-rating is very important for outdoor stages like this one. Using covers would have really detracted from the stage design in this case, which – as I said before – is what attracted the client to our proposal. Power, speed, versatility, the Hydro Beam X19 has it all!”

In addition to the moving heads, Spectrum AV also supplied ADJ static LED-powered wash fixtures to light the stage set itself. A total of eighteen 32 HEX Panel IP fixtures were used to illuminate the pirate sails and other decorative elements, saturating them in vibrant colors to complement the dancing beams of the moving heads. ADJ’s 7P HEX IP LED par fixtures were also utilized, with eight of the fixtures mounted across the curved stage roof. These framed the DJ position with ambient wash lighting, while three more of the units were used to illuminate pirate flags at the very top of the set. Finally, a pair of ADJ’s Encore FR150Z LED-powered Fresnel fixtures were used to highlight the performers on stage.

“Up until a couple of years ago, we were using conventional 1KW Fresnels for lighting DJs at dance events,” explained Willems. “The lamps were always breaking and dragging along heavy dimmer racks to every event for just a couple of fixtures seemed not very efficient. So, when ADJ brought out the Encore FR Series, we bought a couple of FR50Zs thinking that we could at least use them for smaller stages. But when we took them to their first event we said to ourselves: ‘we’re never using dimmers again!’ We were blown away by the output, light quality, and ease of use provided by these LED-powered fixtures. Now we only use Encore FR Series Fresnels; usually FR50Zs, but for large stages like this, with a lot of depth, we use the 150 model. In this case, just two fixtures did a great job of clearly lighting the performers with a nice even coverage of warm white light.”

Spectrum AV also supplied a rig comprised predominantly of ADJ fixtures for the festival’s fifth stage. Housed within a large ‘big top’ tent, the lighting workhorse of this arena was ADJ’s Inno Color Beam Z7 LED-powered beam/wash fixture. A total of twenty-four units were spread across the curved structures of the stage set as well as two overhead trusses which spanned the tent’s four supporting pillars. Testament to the longevity of ADJ fixtures, this fixture was discontinued a number of years ago but still reliably serves companies, such as Spectrum AV, who invested in it.

Another discontinued fixture type that is still going strong, the Vizi Hybrid 16RX, added additional aerial effects and crisp GOBO projections to the base of color washes and beams. Eight of these fixtures were integrated into the stage set, hung from the PA towers and positioned on podiums towards the outer edges of the stage. Once again, 32 HEX Panel IP LED wash fixtures were utilized to light the stage set and its various decorative elements, while Encore FR150Z Fresnels rigged to the overhead trusses illuminated both the performance area and bar area at the side of the tent.

The organizers of the festival were pleased with both the service and equipment supplied by Spectrum AV. This was particularly highlighted when severe bad weather hit the site during the buildup days. Not only did the Spectrum AV team overcome the adverse conditions and ensure everything was ready on time, but the ADJ IP65-rated fixtures were unaffected by the wind and rain they were subjected to before the show was even able to begin. The reliability of ADJ’s fixtures is one of the reasons that Spectrum AV continues to invest heavily in the brand, however of equal – if not more – importance is the customer service they receive.

“As well as providing good quality fixtures that are reliable and well-priced, ADJ is our preferred lighting supplier because they listen to us,” confirmed Willems. “For example, when we first received the Hydro Wash X19 it could either be used with full pixel control or with all the LEDs doing the same color. We requested a ‘ring mode’ to allow our designers to create ‘eye candy’ effects but without using up the number of channels needed for control of individual pixels. Within days, we were provided with the firmware to make this happen, which was incredible service. We like to work with suppliers who don’t just try to sell to us but who partner with us, which is what happens with ADJ.”